Annual Camp is a Love/Hate thing, loved by Scouts, hated by Leaders for the sheer logistical nightmare it involves, read on to see how the 3rd enjoyed theirs.

Annual camp started as usual with a couple of scouts being late *cough* Niall *cough* when we were supposed to have left at 9am but then the bus driver arrived at 9:15 so much for leaving at 9..

We were on the road at 9:30, heading for Lough Dan. The journey started with Niall trying to open the window.. But of course there was a child lock on it so he couldn’t open it. The rest of the journey consisted of Ciaran shouting “YOU TOOK MY SEAT” at poor Lauren, the bus driver blowing the ears of us by playing heavy metal music for a good bit of the journey and of course a bus journey isn’t a bus journey without someone getting sick.

We arrived at Lough Dan at around 1pm. There was soon a swarm of children all around he trailer trying to get the gear out as fast as possible. We were all put in patrols according to the tents we were staying in and we then put up the icelandics which took forever (I’m not naming names trust me it’s for the best!) A few of the older scouts helped put up the massive marquee with the leaders. A few hurleys, tennis ball and a few tunes playing and everyone was soon settled and already enjoying camp! 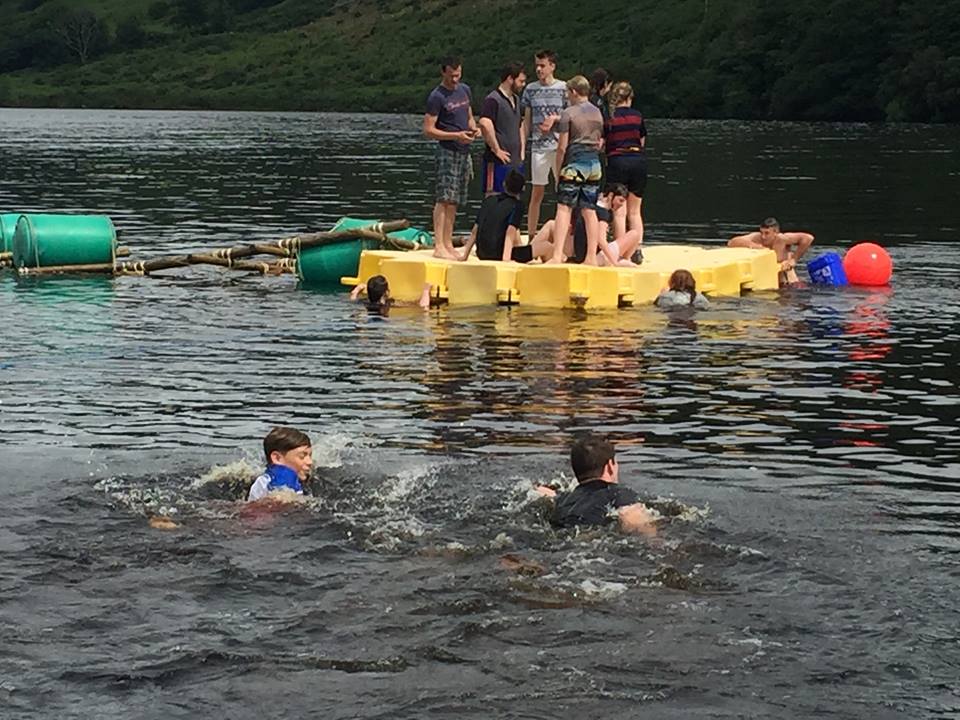 Later on that evening we got told we were heading to the lake for a swim, we were only delighted! Most of us ran in and went straight down in the freezing cold water when a few others chickened out. With the yellow pontoon in sight, we were then told we were only allowed up to our waist in the water… For safety reasons.. NOT FUN! So we found other ways of entertaining ourselves by splashing all those who wouldn’t get down into the water, while still begging the leaders to leave us go to the Pontoon. We headed back to the site a little numb we headed straight for the showers. We all then rushed to the marquee for a dinner of pasta carbonara! After heading off and making a campfire we were all called to the marquee for a quiz. The quiz turned out to be a good laugh even though there was the occasional argument over “no, I’m telling you my answer is the right one”. I can’t recall who the winner of the quiz was but I’m sure it wasn’t my patrol. When it was all over Emily made the most amazing hot chocolate and we all headed straight to bed after a long and exhausting day!

The whole troop were awoken this morning by Hannah’s “GOOD MORNING, IT IS 6:30 IN THE MORNING ,IT’S A BRAND NEW DAY AND I AM WIDE AWAKE”. Let’s just say everyone’s response wasn’t as positive as her morning message. After an extra two hours sleep we were all fed and watered we were off down to the lake in our swim gear to build rafts. They were all done in no time but the girls raft was the only one that actually made it out to the pontoon. (my patrol!) Today we were ACTUALLY allowed out to the the pontoon , yes you heard me we were actually allowed! After hours in the lake Lunch was soon ready and we pegged it up to the marquee After lunch we were all made go for a ‘small’ walk to the nearest shop which was “only 20 minutes” away… 20 minutes into the ‘walk’ and no shop to be seen.. Turns out it was a 45 minute walk which wasnt so fun. We got back after another 45 minute walk stuffing out faces with the food we had bought. As dinner was ready it was time for Lauren and I to head home. We said farewell to everyone and headed straight back to Waterford!

After Lauren and Tara’s departure on Thursday evening, our eight man Icelandic seemed very sparsely populated and bags were stacked in front of the doors to keep in some warmth. We all slept after the tiring activities of the previous day (or maybe it was the lack of sleep the night before, I guess we’ll never know)

The following morning we woke bright eyed and bushy tailed and got our breakfast with Emily screaming at us “DON’T FARGET YAR CUP” in her thickest northern accent which seems to get thicker the more angry she gets. 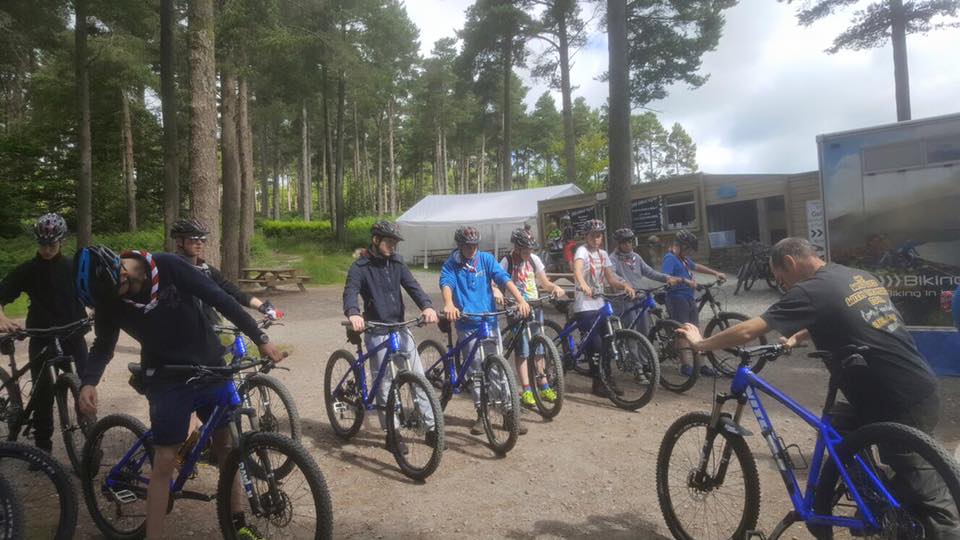 Once wash up was done and everyone had changed out of their two day and night old clothing, we were all called up to the mess tent and asked who had been mountain biking before and who hadn’t. Needless to say all the “tough men” knew exactly what they were doing and went in the first group. The rest of us went for a walk with Cat to the shop which seemed to get further and further away with every step.

When we got back from our adventure to the shop we had our tomato soup and sandwiches. The first group of mountain bikers came back to tell us that only three of them hadn’t fallen off and Ben hadn’t even made it out of the car park unscathed.

The second group of eleven scouts were brought to the mountain biking. Once we got our bikes we went on a trial trail. This eliminated two of our scouts with Samantha falling and managing to scratch her face and Daniel not even being able to do the trail. We set off with the remaining nine soldiers, two more of which made it halfway up the first hill and turned back. the last seven of us trekked on and made it to the start of the course after an arduous cycle and lots of encouragement. Once we reached the course, Roddy, the leader with us, gave us the option of going down the trail or going back the same way we came. Two of the seven went down the way we came and the mighty five went down the trail. It felt unbelievably fast although I would think you could’ve walked faster than we went. Once we reached the bottom we met Billy who drove us to the shop where we found the scouts that has gone back. We went back to Lough Dan a very tired bunch.
We told the first group how great we were and how no one had fallen off and we did a harder track than they did. Somehow, I don’t think they bought it. 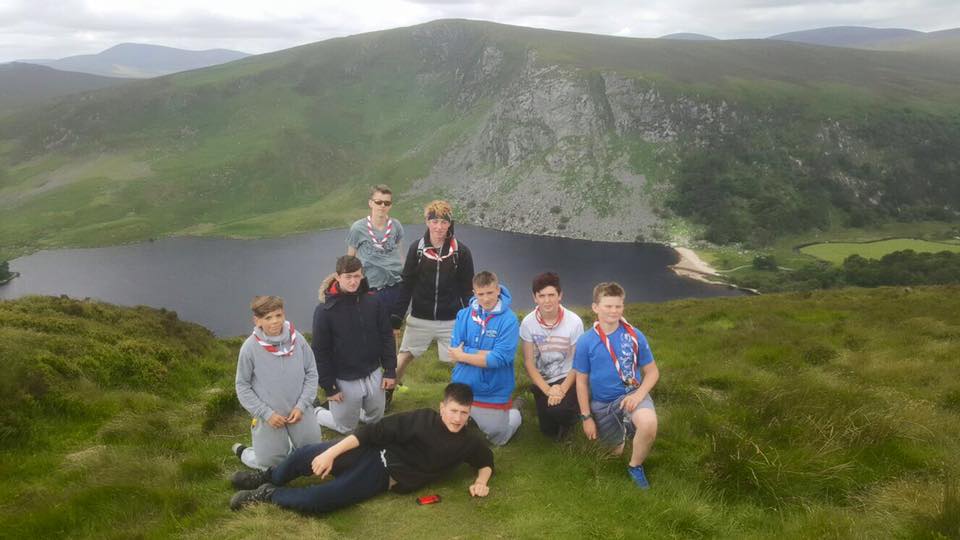 The other group had gone for a swim in the lake while we were gone and were also exhausted. Our dinner was spaghetti bolognese.No one forgot their cup and so Emily was a happy camper.
A group of five of us sat in the mess tent with the leaders to play switch. Billy managed to win almost every game and we all found we were sore losers. Shortly after we went to bed and I fell asleep as soon as my head hit the pillow- or in this case the ground.

We woke at 9:45am on Saturday morning to shouts coming from our leaders telling us the bus to Clara Lara was leaving at 10am. To say the least there was a flurry of shoving wetsuits and spare clothes into day bags and sleeping bags into rucksacks. Everyone was packed into two buses half asleep and pretty dosey.

We were quickly woken to be piled out of the buses and into a car park where we were given wristbands and our letter B for when someone inevitably got lost. Our bags were thrown into a shelter and we went off in smaller groups to kayaking and canoes and of course the huge water slide that we were way too over excited about. 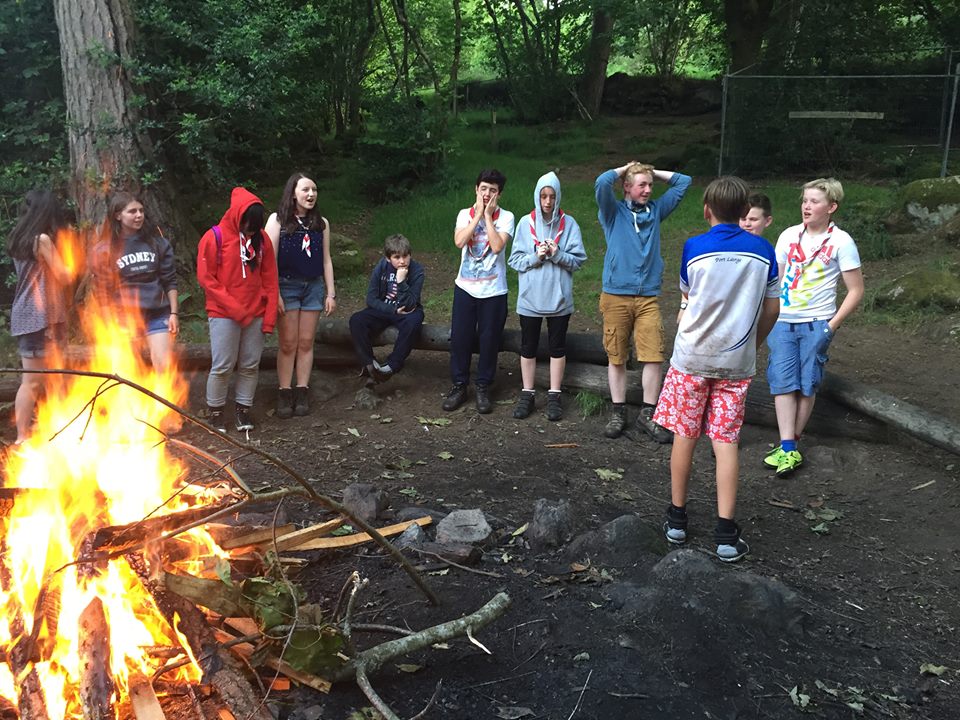 We got the bus back to the campsite which we left very soggy and the smarter people all got showers when we got back. The rest went back into the lake and we were left to our own devices for a few hours before dinner (someone forgot their cup and we all suffered) and a campfire led by Dylan who I’m surprised didn’t pop a blood vessel with all the songs that were screamed.
Just as we were about to bed down for the night. The girls tent was intruded upon by two De La Salle scouts who it is probably best not to name (they had to clean the toilets the day after) followed by Emily screaming “GET ART OF THER NAR” translation: “get out of there now”.
After at least an hour of people chasing and being chased people returned to their tents- This, however, does not mean they went to sleep. At 3:30am there were some angry shouts telling everyone to shut up. At around 5:30am people finally started sleeping.

We were woken later that morning and told to take down the Icelandics and clean the site. Two boys and two girls were chosen to clean the toilets and everyone else was lined up with plastic bags to pick up every last trace of our visit. 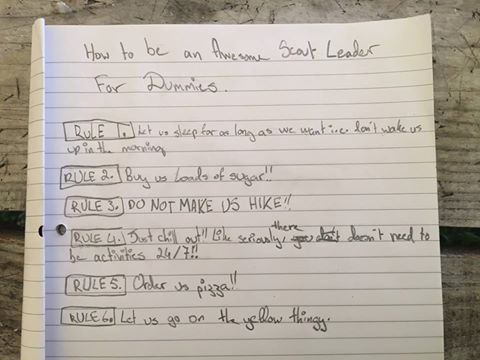 The bus arrived and we piled on in our twos. We messaged our parents to tell them we’d be back in Waterford at 12:45pm. In true scouting fashion we rolled up at 1:40pm and got straight off the bus into cars to go home and have some well needed sleep or showers.
We were all tired and smelled awful but I always think they are two signs of a great annual camp.
-Emma