The Nízke Tatry Ridge forms the spine of the Lower Tatra mountains in central Slovakia and it is part of the E8 long distance walking route which runs 4900km from Dursey Head in West Cork to Istanbul in Turkey.  Last year Eoin Kelly (3rd Cubs and DLS Rovers) and Colm Ennis (DLS Online Editor) completed the 603km Irish section of the E8 which joins Dursey Head to Dun Laoighre via the Beara, Kerry, Duhallow, Avondhu, East Munster, South Leinster and Wicklow Ways. An article in the Sunday Times on the E8 gave the lads the idea to pick up the trail again at its central point in Slovakia when they heard Jans Schellekens describe it as one of his favourite sections. Jans who is from the Netherlands, has completed over 2000km of the E8.

Research then began although English language information about the E8 section in the Lower Tatras proved hard to come by. It turned out that the Nízke Tatry Ridge is part of Slovakia’s 750km Cesta Herdinov SNP trail which in English translates as the Heroes Path (Slovak National Uprising). It commemorates those who played an important part in Slovakia’s uprising and the country’s liberation. Google Translate added: “Tough terrain, unpredictable weather and unfamiliar conditions attract and discourage at the same time. Strong will and self denial, mindedness and positive thinking. These are the main ingredients in soup called success. Add experience, good equipment and you can cook the adventure on the Heroes Path SNP.” 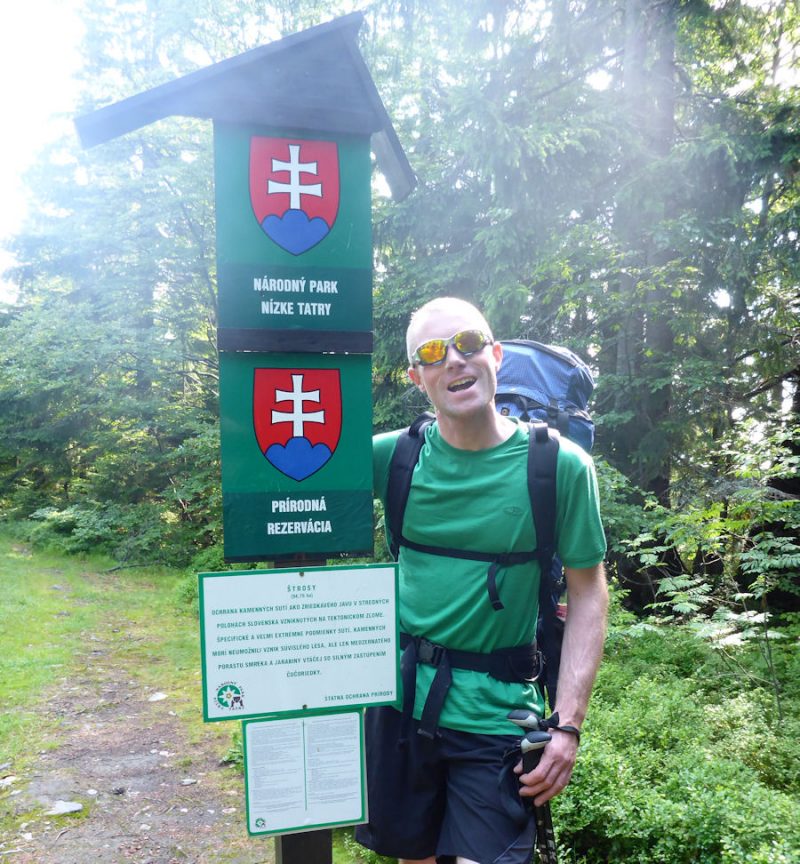 “We understood that the Nízke Tatry Ridge would take five days or so from Donovaly to Telgart and as Istanbul is our ultimate destination we arrived in the quite deserted village of Donovaly village in the Banská Bystrica Region which is at 960m with a plan to hike east. The route is signposted as the E8 and it immediately felt very strange to be picking up a trail that we had begun 2000 kilometres west by hiking on the Beara peninsula from Dursey Head to Kenmare.

We were taken high onto the crest of the ridge straight away and we stayed above 1700m for most of the first day with just one big descent to pick up water supplies. As the day went on there was some cloud build up and a threat of rain so when we arrived at the ‘Utulna pod Chabencom’ hut after about 9 hours on the move we decided to stay there. It was basic but warm and there were a few weekend hikers about. Unsurprisingly we were the only non Slovakians staying and there was no change to our uniqueness as travellers throughout the trip.

The next day took us high again, firstly over Chabenec (1963m), soon after which we picked up an amazing stone road which led us as far as the Klingon sounding Chopok (2024m) where there is also a good sized hut and food. The distance dial on the summit showed that we were exactly 1870km from Dublin and 1150km from Istanbul. From there it was over the busy summit of Dumbier (2046m) where the trig point had to be ‘bouldered’ and as we were starting to motor we cracked into the following day’s route. We eventually found a campsite amongst the dwarf pine on the ridge below Rovienky.

Tomato purée added to pasta makes a decent meal when on the trail and we planned a large feed of it after another 10 hour day. It turns out however that tubes of concentrated chilli, pepper and paprika sauce from Slovakian supermarkets bare a strong resemblance to the tomato variety especially after an early morning Ryanair flight and that’s what we discovered we had generously mixed in to our pasta after a few burning hot mouthfuls. Live and learn.

After a dramatic sunrise over the Spiš valley between the Lower and the High Tatras, it was down to the Certovica Motorest for “second breakfast”. Then we were back into the forest and up on to the ridge again. The evidence of a huge storm that hit Poland and Slovakia 11 years ago is amazingly still everywhere to see. Vast areas of their forests were devastated by the storm and many slopes are still haunted by thousands of trees that were slashed in half. In places there are also quite a few trees across the mountain track which called for some entertaining climbing over and under branches at times. We heard from a local that a veracious black beetle that took hold after the storm has added to the devastation. The beetles were plentiful on the route as were chamois, deer and the odd snake. Sadly we didn’t spot any Slovakian brown bears.

After a shivery sleep the previous night we were relieved to find a well maintained hunters cabin above Sedlo Priehyba where we were able to pitch the tent in the attic. The darkness, quiet and warmth from the old stone building added to another extra long day on the trail contributed to what was a restful night.

The following morning we lost the trail in the forest twice but being able to relocate easily using the GPS on the iPhone and the Viewranger app with 1:25,000 maps of the entire region installed took some of the usual thrill of relocating ourselves away. The smartphones were kept powered on the trip by an excellent GoalZero solar panel with a Switch 8 powerpack. Deciding what side of the rucksack to hang the panel on and taking a compass bearing off an iPhone were strange new experiences and definitely first world problems!

As we were ahead of schedule we decided to make one long push to complete the ridge on day four. That would mean quite a hike over Orlova, Stredna Hola and the final summit of Králova Hola (1946m). The trail was tough going in places and for long sections we were fighting though thick dwarf pine.

We signed the hut book and enjoyed the water from the cool spring at the Útulna Andrejcova hut and again it seemed that not many from the west of Europe have passed that way.

The approach to Králova Hola reminded us of the long traverse of the Blackstairs Ridge. The English translation is the “King’s Bald Mountain” even though there is an enormous Mount Leinster like TV transmitter and weather station on the summit. Kráľova hoľa is often depicted in Slovak folklore and romantic poetry as a safe refuge of heroes and highwaymen and the mountain has become one of the informal Slovak national symbols along with Kriváň which is in the High Tatras. The summit installations gave the place the atmosphere of a big communist communications bunker or rocket launch site and there was an incredible panorama of the Spiš, the Tatras, Liptov, and the whole Upper Hron Valley. We were out of food however so we didn’t delay too long before getting stuck into the 2 hour 1100m descent into the town of Telgart. A gargantuan Loch Lomond burger was needed. 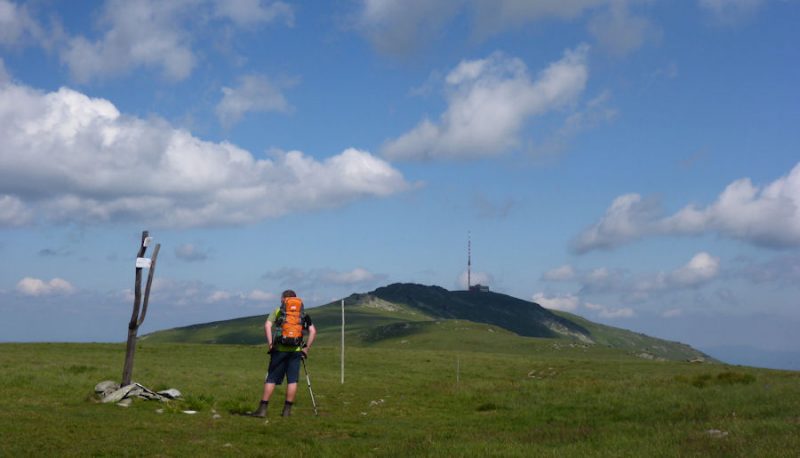 We always have a vague hope that the De La Salle Scout Pipe Band will be waiting to pipe us in at the end of one of our treks but Telgart was quite deserted and had a very weird atmosphere after the spell in the mountains. Watching ‘Hostel’ the American horror movie set in Slovakia where backpackers were captured and tortured to death before the trip had never been the best plan so we were glad to get away from the strange looks we were getting in Telgart to find Penzión u Hanky and a decent feed. The next morning Telgart seemed a lot friendlier and the grocery shop owner seemed very pleased to see us visiting his town from Ireland although he was sad about the many Slovakian young people who had departed the area to work in Ireland and many other parts of Europe.

The Nízke Tatry Ridge is a really great section of the E8 which is well supported with mostly unmanned huts although supplies can be picked up when needed. It was much quieter than we expected it to be and we didn’t meet any other hikers walking the route in the same direction as ourselves. Completing the five day route in four longer days meant that we had again lived up to Andrew Skurka’s definition of an ‘Ultimate Hiker’, i.e. someone whose objectives for a trip involve hiking long distances by perfecting their gear, hiking style, and knowledge of the conditions. An Ultimate Hiker is someone who wants to hike and explore, not make camp and laze around!”

With the Nízke Tatry Ridge in the bag, the lads were tempted to make a quick trip to the High Tatras after the stunning views of them from the lower range. The impressive and great value Slovakian public transport system meant getting to Stary Smokovec in the Vysoké Tatry region was very easy by bus and then electric train. A word of warning though, the gear shops in Poprad are world class and a climber with a credit card could spend a lot of money.

From Stary Smokovec, Eoin and Colm made an ascent of Vychodna Vysoká (2429m) on the Polish/Slovakian border from the Velicka valley which gave fine views of the entire range and indeed back to the Nízke Tatry Ridge. The following day they ascended the Mlynická valley to the Bystrá lávka pass (2300m). A diversion to ascend Satan (2422m) was thwarted by the ice and snow lingering in Satan’s Couloir so a descent of the neighbouring Furkotská valley was made instead. They hadn’t expected to need crampons in July! Eoin has however joined that small list of climbers to have perfected the “ice jam” which involves making upward progress on mixed climbing routes thanks purely to hand jams between ice/rock and ice/ice. 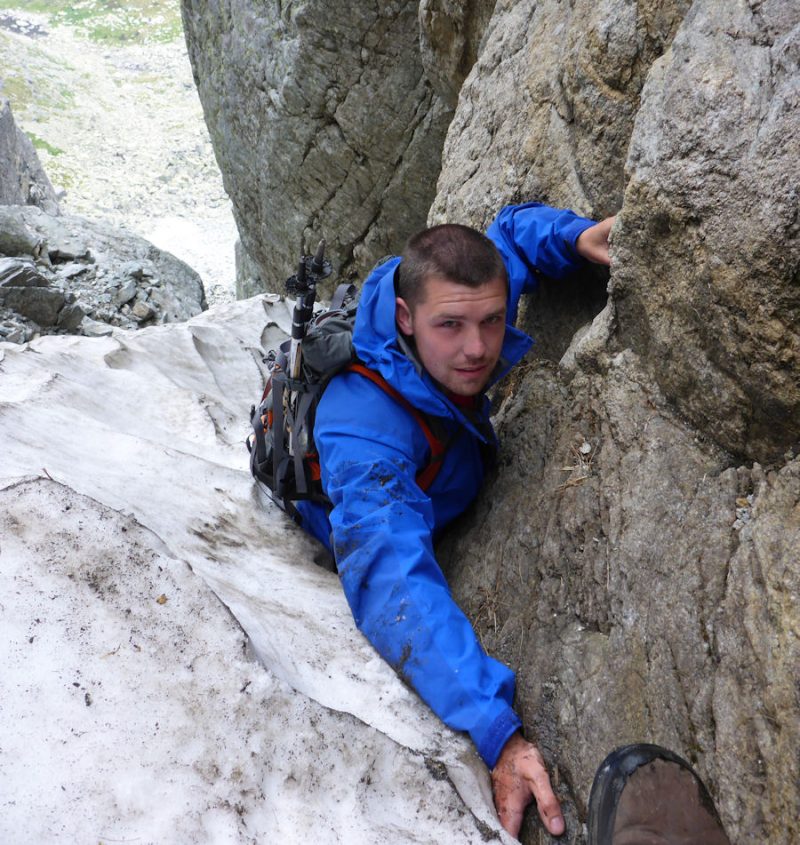 The impressive, smooth and very out of context taste of Duff Beer at the lake of Vyšné Wahlenbergovo brought the expedition to an end for the lads, after which it was back home via a hot and lively Bratislava.

Eoin and Colm are also members of the Rathgormack Climbing Club. As well as walking multiple Irish long distance trails, other routes they have completed outside of Ireland include the GR20 in Corsica and the West Highland Way in Scotland. They would love to hear from hikers who have completed other sections of the E8 and they are rumoured to be looking for another epic stage of the E8 to tackle.