A unique scouting tradition for over 85 years.

One of the things which makes scouting unique in Waterford is the existence of the Scout Pipe Band connected to the De La Salle Group. Our Pipe Band was founded in 1934 and has been a unique part of our scouting tradition for over 85 years now. Today Pat Murphy is Pipe Major and the band regularly participates in group, county and national events. It also makes regular public appearances at venues all over Waterford City. In the last few years we have also undertaken a number of major expeditions to Scotland and France.

The History of the De La Salle Scout Pipe Band 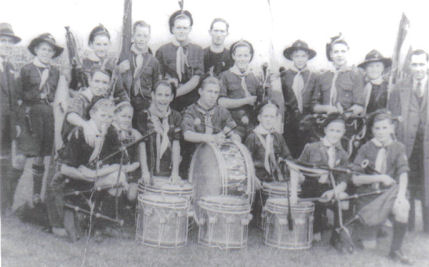 It was decided at a Group Council meeting on December 15th 1933 that the Group would have the first pipe band attached to a Scout Group in Ireland. On May 15th 1934 on Saint De La Salle’s Day, the De La Salle Scout Pipe Band made it’s very first public appearance when it led De La Salle on a parade to the Cathedral of the Most Holy Trinity in Waterford City. The first members of the Band were Wattie Walsh, Ted Ryan, Bobby Barr, Mick King, Tommy Jackman, Paddy Walsh, Paddy Murphy, Dick Hanlon, Billy Walsh and Billy Barr.

In the 30’s and 40’s the band was in big demand and played at many public functions, parades and processions. In those days the band paraded in full scout uniform. It made its radio debut on Radio Eireann on December 30th 1943 and in 1948 it played in Croke Parke. In the early days of it’s existence the band also led the St. Patrick’s Day parade in Waterford City but during the war years the custom of the army leading the parade took over and in recent years the De La Salle Scout Pipe band leads the Waterford Scout County in the parade. In 1953 the band members added a saffron kilt to the scout uniform and this tradition has continued to the present day. 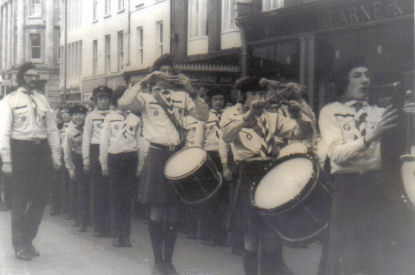 In the 60’s a group of scouts including a piper travelled to Rome and the tradition of De La Salle pipers leading Scout international gatherings began. Towards the end of this decade, the band was also totally reorganised by Br Finbarr with the help and assistance of Piping Instructor Stephen Power and thus began a new chapter in its history. The band made its television debut in 1969 when it played on a “This is your life” programme for singer and songwriter Val Doonican who had been a member of the band. 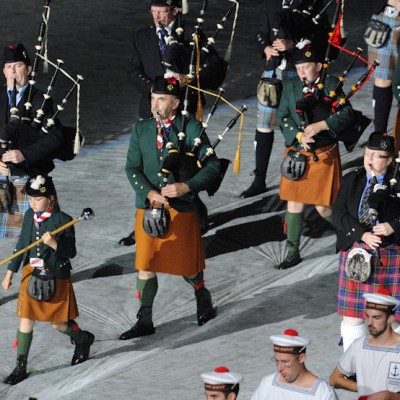 Throughout the 70’s the band reached a very high standard under the instruction of Stephen Power and it played all over County Waterford in support of scouting which was growing very fast at the time. Again the band uniform was improved and a jacket was added. In 1977 the band played to an audience of 12,500 people at a National Scout Jamboree held in Mount Mellary. The 80’s and 90’s included another television performance on RTE’s Trom agus Eadrom programme and it also performed on stage at the Dublin Scout Show and the London Gang Show. Pipers continued the tradition of leading international scout contingents and De La Salle Pipes were heard in Korea, Japan, Holland and Chile. The Band also played for the King of Sweden at a function for the World Scout Fellowship. 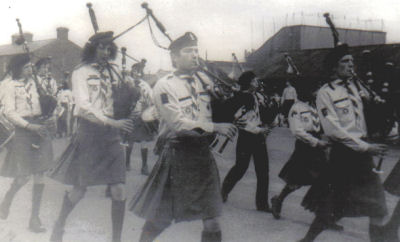 In the years from 2000 to date the band has grown once more and now has the biggest numbers in its history. In 2002 the band led the parade at the 75th Celebrations of Scouting Ireland CSI in Dublin where the President of Ireland, Mary McAleese took the salute. In 2004 the band celebrated its 70th Anniversary and held a massed pipe band parade on May 15th in John Roberts Square in Waterford city centre to commemorate the first parade of the band in 1934. 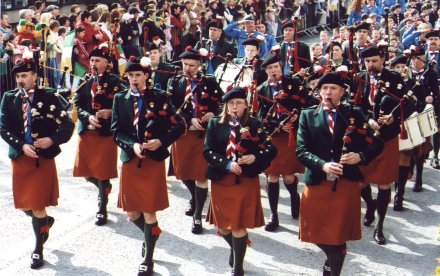 In the summer of 2005 the band made its first trip out of the country, in a good few years, when it made a week long visit to Scotland, the home of highland piping and drumming. The band was the guests of the North Berwick pipe band and the local scout hall was its base for the duration of its stay. The highlights of the week was a Town reception and performance at the Lodge in the town with the North Berwick Pipe Band, a performance at Leuichie House which is a local respite home for the suffers of MS and participation in the Edinburgh Pipefest, where thousands of pipers and drummers paraded and then performed together as one massed pipe band. The band members also attended the famous Edinburgh Tattoo, had a day trip into Edinburgh to sample the famous festival and took a three day bus tour into the Highlands.

In 2006 the band made a return visit to Scotland and competed in the North Berwick Highland Games. It also performed in the famous Edinburgh Festival Cavalcade parade with the newly established Scout Centenary Pipe Band. The establishment of the Scout Centenary Pipe Band was an initiative to involve scout pipers and drummers in the celebrations of 100 years of scouting the following year. At home the band got involved in another new initiative when it collaborated with the other bands in Waterford City and put on a massed bands concert in the City to raise much needed funds for local charities. This has now become an annual event in Waterford. 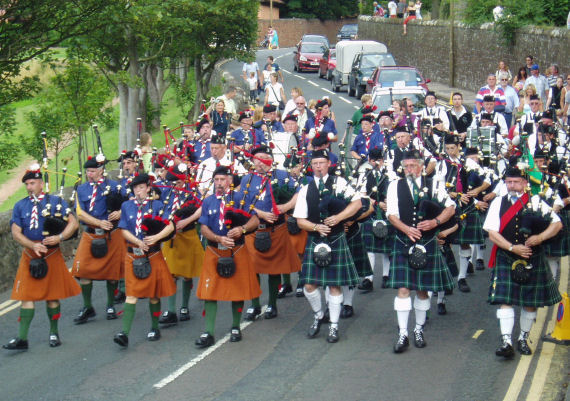 In 2007 the band attended, as special guest, the World Scout Jamboree in Essex in England to celebrate 100 years of scouting and it performed to an audience of 30,000 scouts and their leaders at the Sun Rise Ceremony, which was one of the major celebrations. The band also made its third return visit to Scotland and this time as well as other performances it took part in a major massed bands parade at the famous Floors Castle located in the Lowlands. 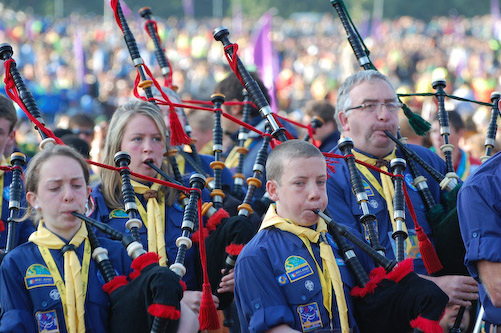 In 2008 to mark 100 years of scouting in Ireland some Scottish pipers and drummers travelled to Waterford and participated with the band on Patrick’s Day in parades at Waterford, Dungarvan and Clonmel. During the summer some members of the band travelled and met up with members of the 7th Troop who were having their annual camp in Scotland and again joined with the Scout Centenary Pipe Band to take part in the Edinburgh Festival Cavalcade Parade. The band also commenced competing in competitions, with individuals taking part in solo competitions and the full band involving itself in two band competitions run by the Munster Branch of the IPBA. 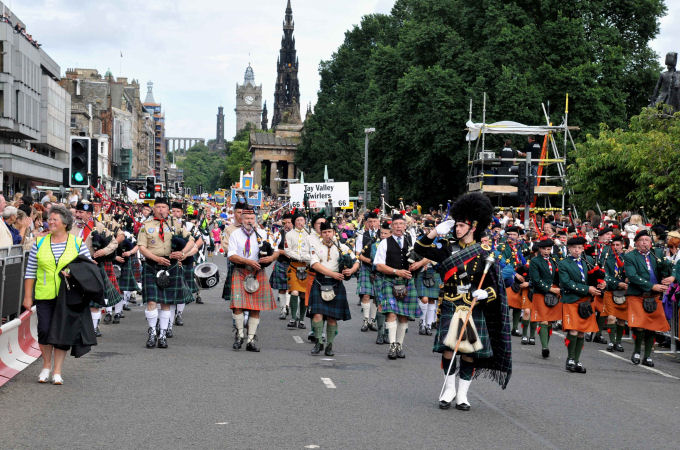 2009 was a very prestigious year for the band as it celebrated its 75 anniversary with an array of events. These included a Pipefest in Waterford attended by pipers and drummers from all over the world, a Mayoral Reception in City Hall, the production of a CD, participation in the world renowned Festival Interceltique in Brittany in France for a period of ten days and a concert later in the year to complete the celebrations. While a number of individuals had won solo events, this was the first year the band won a prize in competition and this was achieved when the drum corps took first place in their grade and were crowned Munster Champions. During this year a number of the young members of the band joined the National Youth Pipe Band and put on very successful concerts in various locations over the following year or two. The band also made changes to its uniform when it introduced waistcoats, changed its headgear to a Glengarry and began wearing gilly brogues. 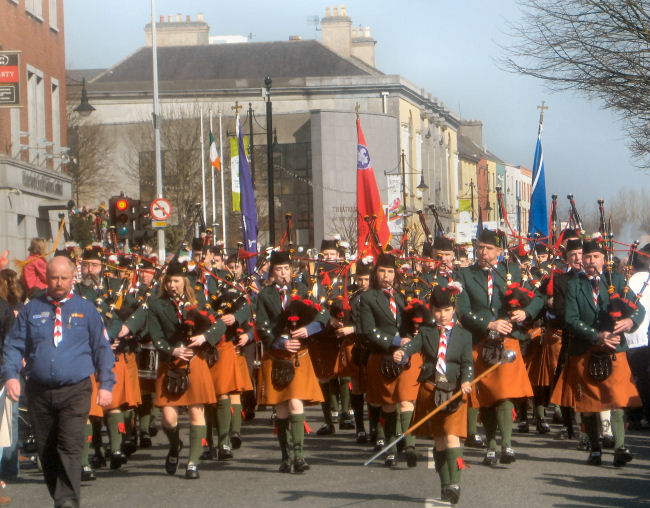 In 2010 the band was invited to return to the Festival Interceltique in Lorient and as well as taking part in all of the regular events it was chosen to put on a concert in one of the main venues and participate in a parade in a festival in a neighboring town. In the autumn the band was invited to Hausguaen which is on the French/Swiss border where it took part in a newly established tattoo and festival. This year the band won its first major pipe band competition in its grade and was Crowned Munster Champions. The drum corps also maintained its title. 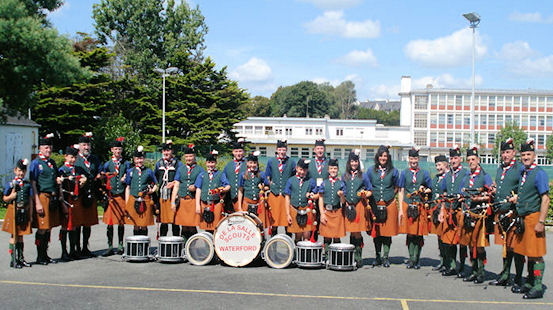 In 2011 the band was invited, as the main attraction to take part in Festival Bleau in Concarneau in Brittany, France. The band also returned to Scotland and took part in the Pitlochry Highland games, where the band took fourth place and the drum corps took first place in there grade in a competition with some of the finest Scottish pipe bands. On the home front a number of first places were achieved by individuals taking part in solo piping and drumming competitions and the band were again crowned Munster Champions in one of its grades and took second place in an other while the drum corps held on to its first place for the fourth year running. 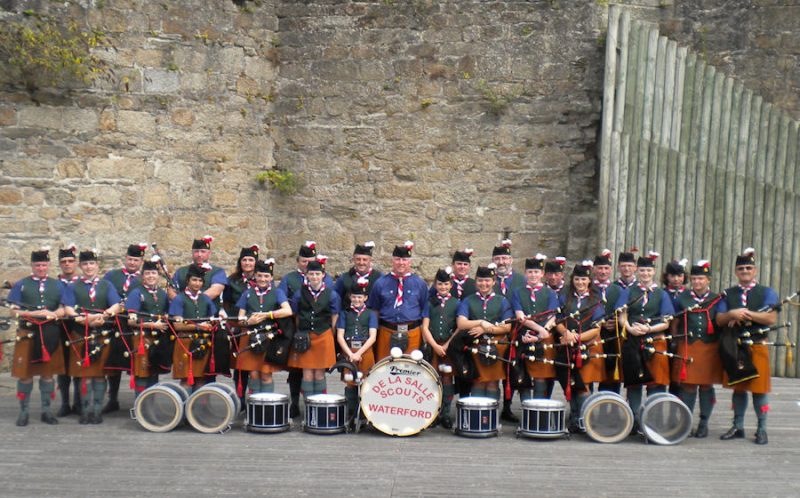 The band had another very active and successful 2012 and several young members won solo piping and drumming competitions and were crowned Munster and Leinster champions. The band also competed and did very well in a number of Pipe band competitions in Ireland last year and in June were again crowned Munster champions in their grade. In August at the Festival Interceltique in Lorient the band won the March, Strathspey and Reel competition and came second in the Medley competition. It also made a return visit to Scotland and competed against some top Scottish pipe bands at the Pitlochry Highland Games. The drum corps continues to perform very well and had a very successful year taking a number of first places at band competitions and was also crowned Munster champions for the fifth year in a row. 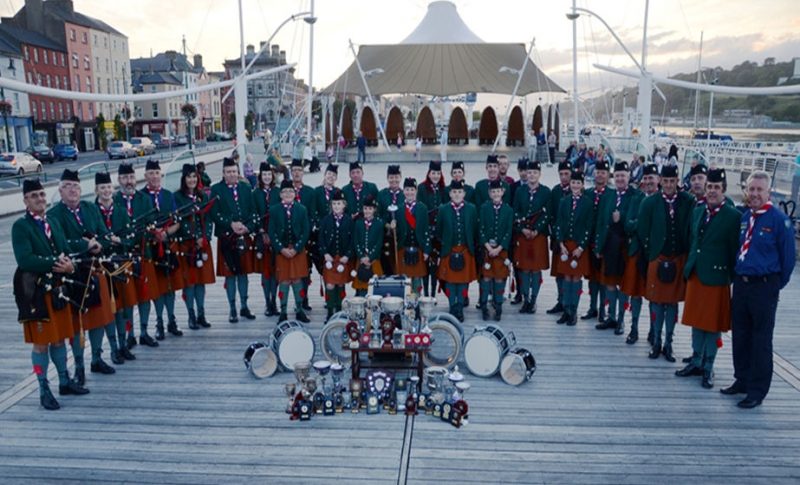 The band had a very full programme of events at home and supported various community and scouting events in and a round the city of Waterford and beyond. During the summer it took part in Waterford City Council’s Arts programme, performing several Saturdays in John Robert’s Square and each Monday evening at The Vincent Wallace Plaza on the quay. 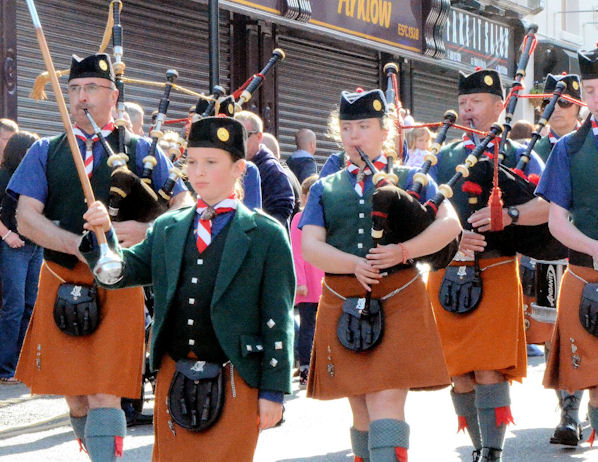 2013 looks like being another busy year for the band – check out our blog and facebook pages for more details as they happen.