Last Tuesday, 19th November, a mayoral reception was held to celebrate the achievements of the Phoenix-winning team of the 7th De La Salle scouts, Elaine Stone on coming 3rd in the All-Ireland Junior piping competition, and Eimear Costello on coming 1st in the U14 category of the piping. Eimear was also a part of the winning Phoenix team, which was led by PL Adam Hayes. 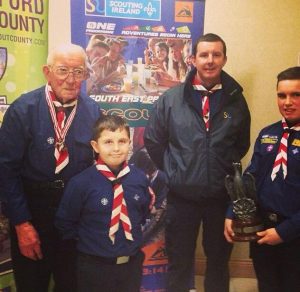 Adam and his brother Dean with the Phoenix trophy.

The evening was kicked off with speeches from prestigious speakers such as Robert Windle, Pat Murphy, Owen Riordan, and of course, the Mayor of Waterford City, John Cummins. We would also like to thank the County Commissioner, Brian Fanning, for his attendance of the event, it was greatly appreciated and added to the occasion. Scrolls were presented to Eimear and Elaine, celebrating their achievements with the band, before Adam Hayes, PL of the 7th’s team was called upon to make his presentation to the rest of his patrol. Later on, we settled down to the real business of the tea and sandwiches, I think everyone will agree that the egg-mayonnaise with lettuce was the real winner of the evening.