Above: Alex, Matt and Adam from the 7th De La Salle Scouts with DLS Online Editor Colm Ennis on the first Sionnach Adventure of 2013 in Wicklow. They are pictured at Art’s Cross which is close to where Art O’Neill died in 1592 on his flight from Dublin Castle to Glenmalure with Red Hugh O’Donnell. 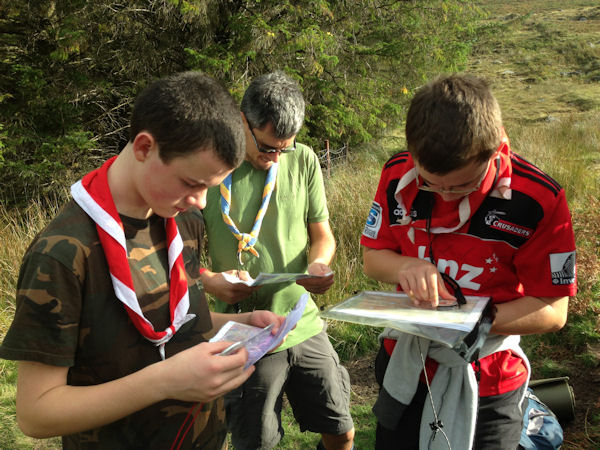 We all met up at the den at 7:30 to leave for Wicklow, the garden of Ireland. And with Alex and Adam having a score to set straight after last weeks trip to Achill (according to some reports, a certain ‘patrol member’ found it difficult to fit into their Tadpole). We were out of the den by 8 in Mr. Ennis’ wagon of fun, but only after his heroics with John O’Donohue in saving a distressed mother’s Corsa from the dreaded gate of St. Stephen’s. 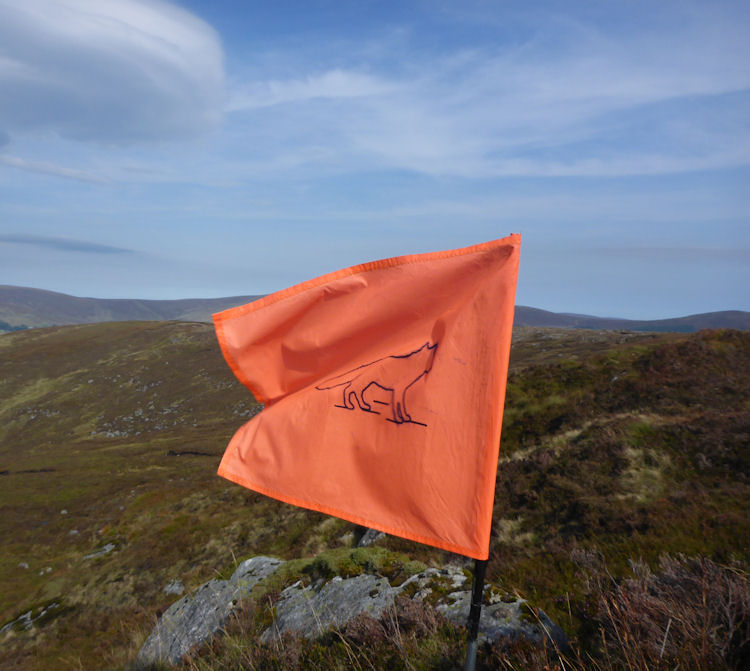 By 10 o’clock we were turning off at Glendalough to check ourselves in. We changed into our hiking gear and completed the short 400m stroll to Base Camp. Our Tadpole’s were pitched ,with everybody fitting in, and after a quick supper of Cadbury’s Rich Tea’s we were set for bed. 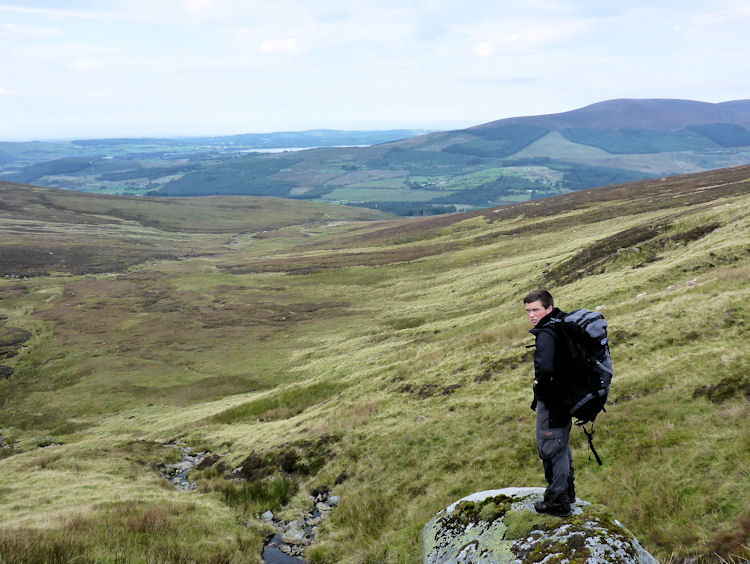 We got up around quarter past 8, and packed away all our gear without too much difficulty, the weather was good, which is always half the battle. We had a 4.5 kilometre hike before getting to our High Camp, where we would spend the night. This was scheduled to take us 2 hours, but we had it completed in just a little bit over an hour. Adam and Alex were already putting last week’s adventures behind them. But hey! What happens in Connaught stays in Connaught. 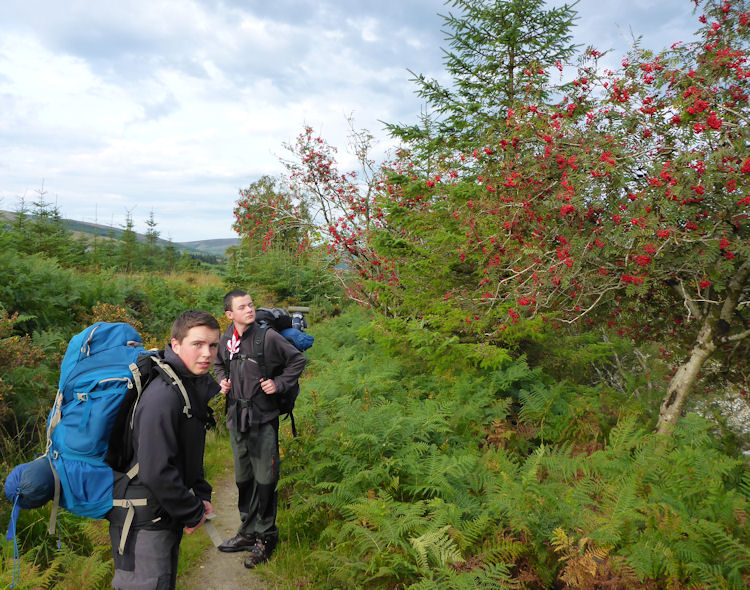 Above and Below: Mountain Ash or Rowan … Sorbus aucuparia … an Caorthann 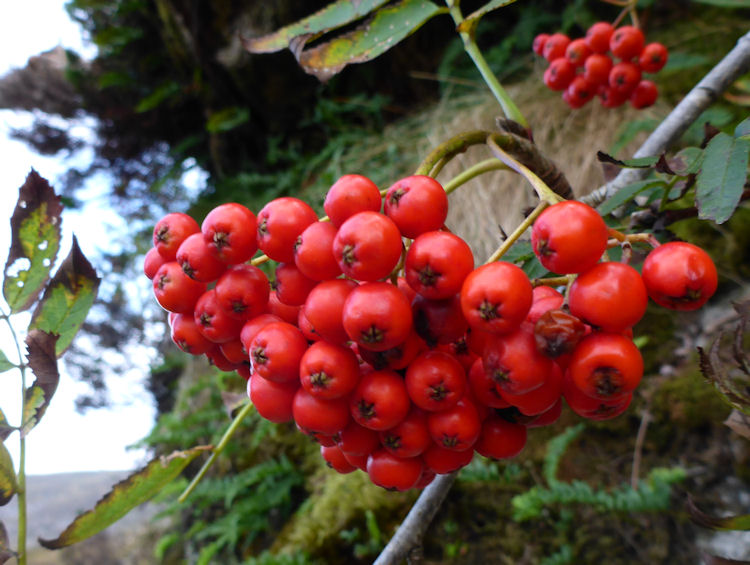 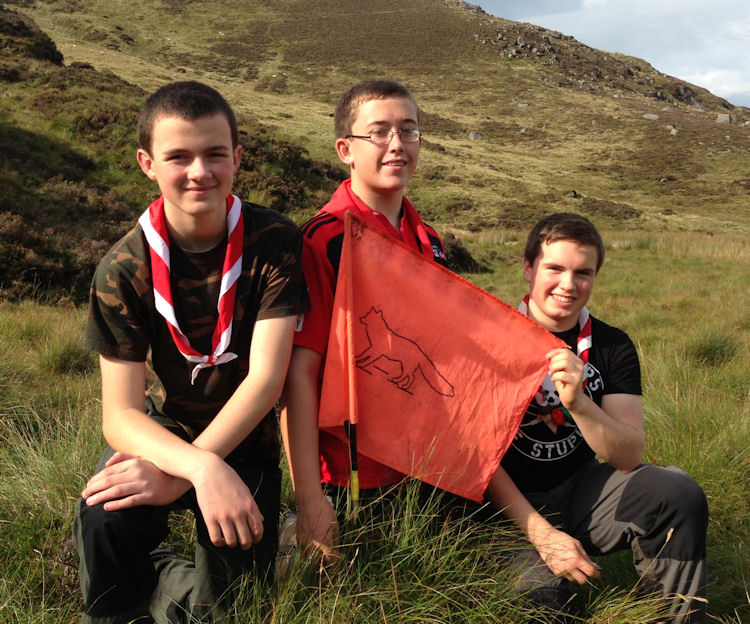 Over the course of the trek we viewed some historical landmarks, such as the cross of Art O’Neill, first man to escape from Dublin Castle, don’t you know? 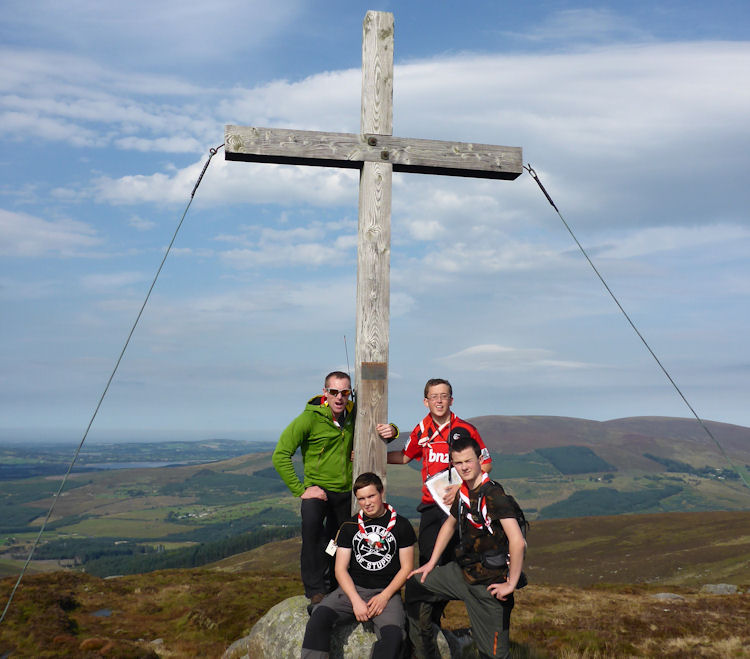 We gave up our lead in the interest of viewing some of the local landscape. Colm brought us to an extra peak, Mount 702, making our 10k hike an 11.5 one. From the top, we had a perfect view of Turlough Hill, the Glenmalure Valley and Lugnaquilla. If you don’t know what Turlough Hill is, the device that you’re reading this on probably wouldn’t be working without it. 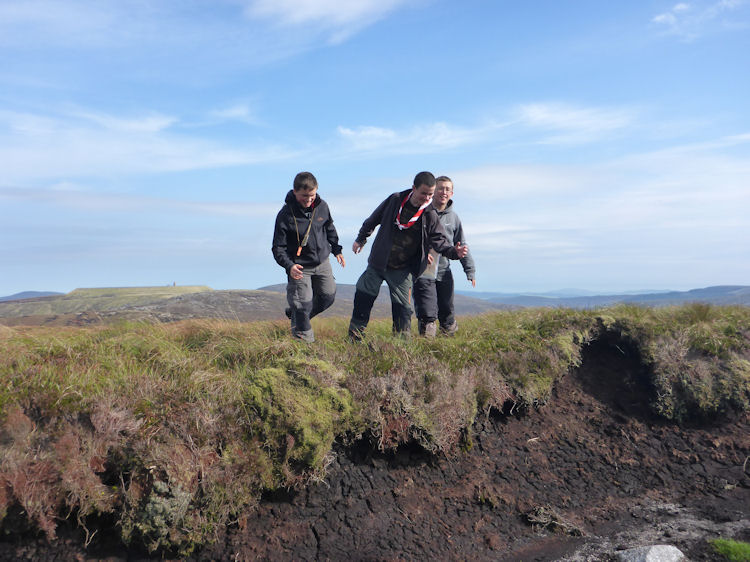 Above and Below: At 702 with the upper lake of the Turlough Hill hydroelectric power station behind. 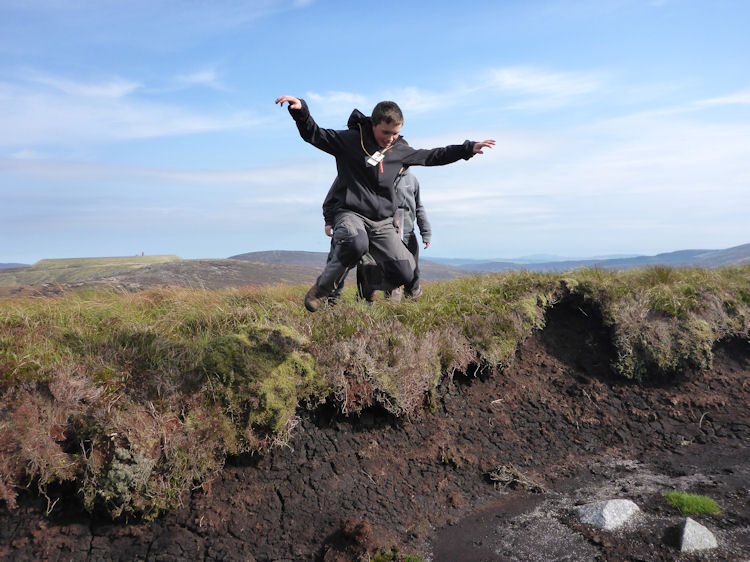 After this, we rolled down the side of the mountain (Mount 632 this time) to High Camp for some Pot Noodles, dinner of champions. Despite our detour, we were still the 3rd patrol back at Camp. 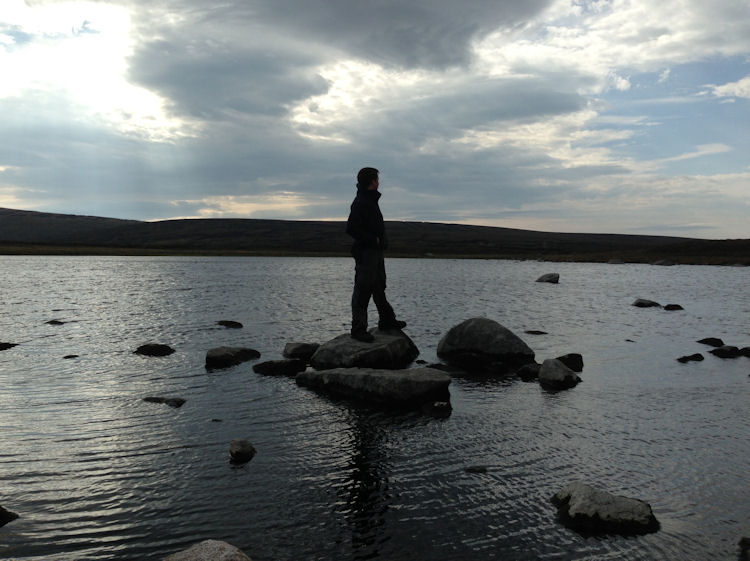 Above: Adam at one of the two ‘Three Lakes’

The organisers had a special Banoffi-making competition, but instead of having our one judged, we decided to eat it ourselves. Solid 8/10 and sure hopefully the old circulatory systems will hold up after it. Straight afterward it was time for bed. 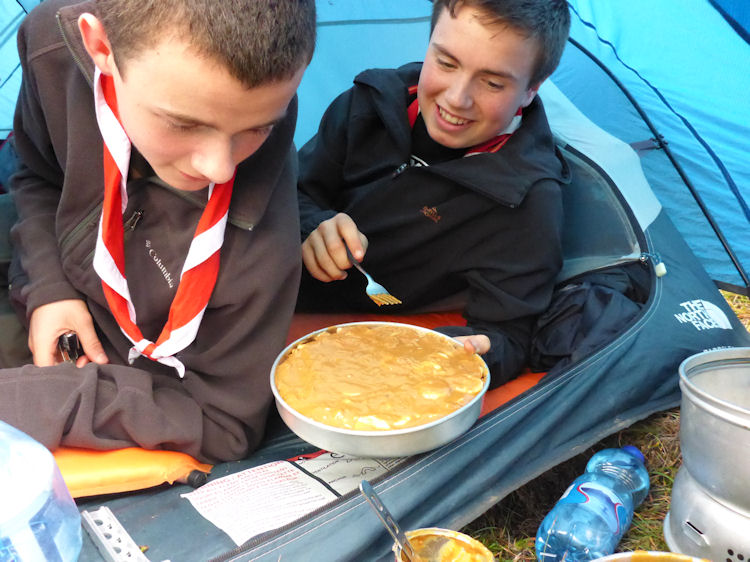 We were up at 8:30, tents packed away and all. Once all our gear was fitted into our rucksacks (Which at this stage were more like stuff-sacks) we went up to the presentation of the badges, ours were handed out first with the organisers referring to us as ‘Seasoned Hillwalkers’. 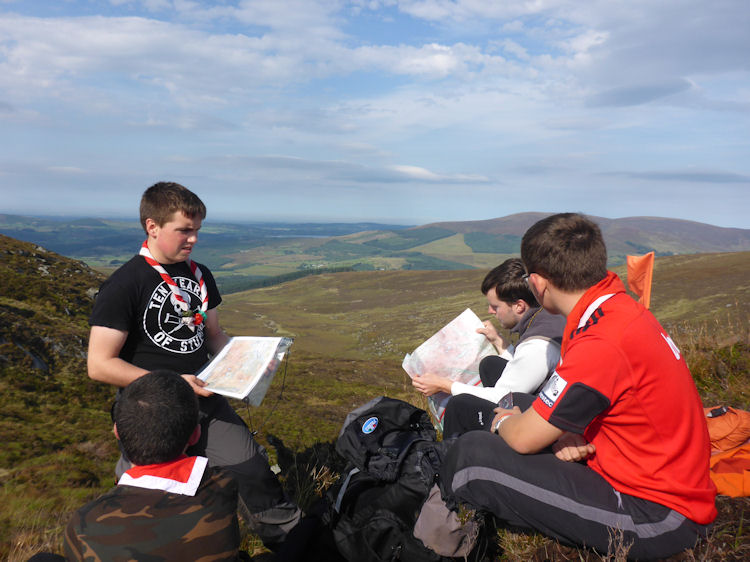 Above: Feature recognition at Art’s Cross and Below: Killer in the Bog. The carnivorous ‘Sundew’ spotted at Gleenreemore, Wicklow Mountains this weekend. “On average, a sundew plant traps up to five insects per month”. This one seems to be ahead of the game. 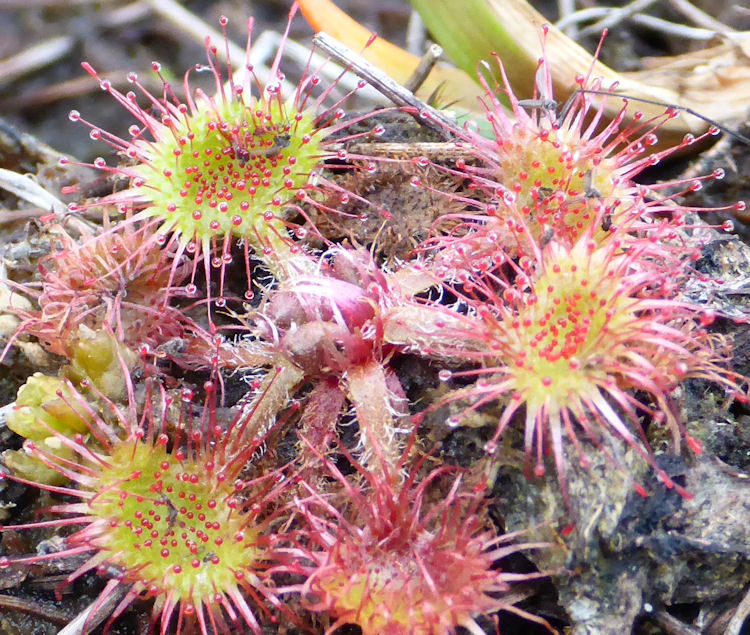 We checked out around 10 and began the expedition back to the car. After a bouldering base, where Adam came out on top, we had to climb over one last hill, there was some slight confusion, but thanks to some #instadeadly navigating we remained on course and were back at the start, some 25 minutes before the 2nd patrol. 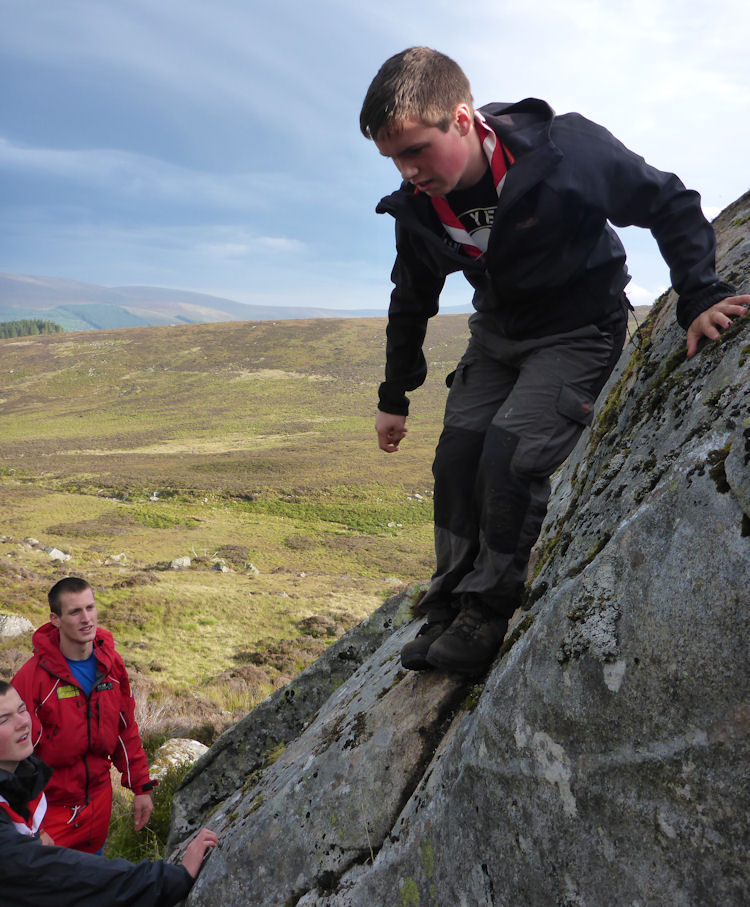 As Colm went to get the car, me, Adam and Alex were given some time to reflect on the weekend, an overall success was the conclusion. The best part of an MPC, or Sionnach, is always the end, and no part more than the traditional pit-stop at Supermacs, hot Muffins and all. After our refreshment, the rest of the way home was quick and we were back in Waterford by 2.30pm 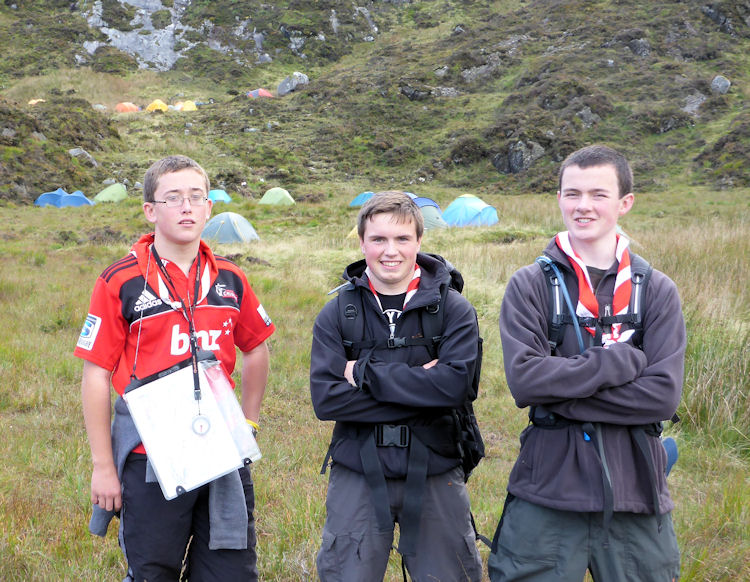 Above: The team from the 7th De La Salle Scouts (Matt, Adam and Alex) and Below: The Banoffi gets devoured! 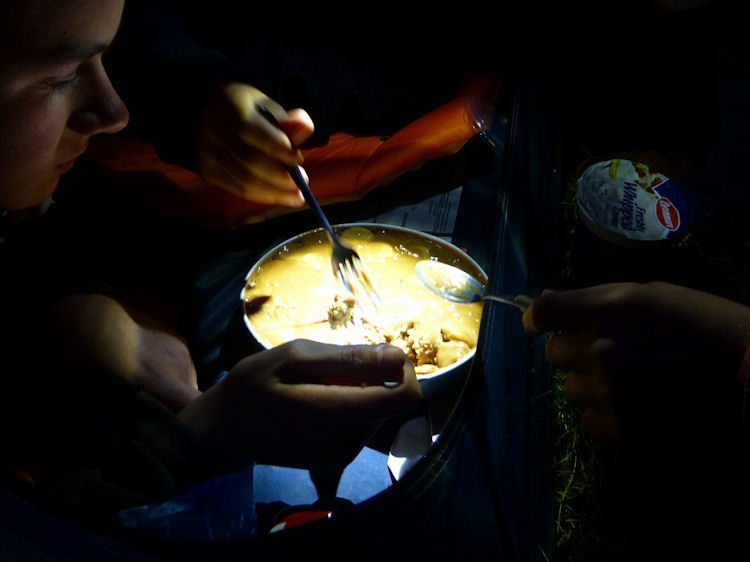 Editor’s Note: This weekend’s Sionnach Adventure in the Wicklow Mountains was held on the 30th Anniversary of the very first Sionnach which was also held in Wicklow in 1983. The De La Salle Scout Group would like to thank the organisers of this weekend and indeed of the many Sionnachs that teams from our Group have attended over the years. The staff, bases, organisation and overall atmosphere of the Sionnachs is always brilliant and we would highly recommend them to all other scout troops who would like to lift the standard of hillwalking, camping and adventure in their troops. We have also been lucky to have a number of our senior scouts attend the excellent PEAK events in Co. Kerry over the years. Find out more about both events by checking out: sionnach.org and about Peak via the link below.