The 2000 Cairde National Venturer Competition was the fourth of its kind. It was held in Larch Hill on the first weekend in July and the competition saw the biggest entry of teams yet. The theme for the weekend was Latin America as everything went El Mexico style. The weekend kicked off on Friday night with a relaxed atmosphere as the teams arrived and set up camp. A Bar-B-Q was laid on to feed our hunger as everyone got reacquainted with old friends and mingled with the other Venturers from around the country.

Saturday morning saw the start of the competition despite the bad weather and occasional monsoons. The bases were spread around Larch Hill and involved all those little aspects of scouting that we learned years ago and have long since forgotten. Luckily they also involved getting soaking wet, covered in paint and generally having great craic. We practiced our first aid and orienteering as well as acting out our own sheep dog triails. One of the highlights of the day was the lesson in Samba drumming which could be heard in Cork. The backwoods cooking base saw everything from kebabs to stews and baked potatoes. Several river crossings and skirmishes later we all trudged back to our tents for a much needed change of clothes and a spot of food. After mass things started to go strange, ponchos, sombreros, and numerous skirts and dresses of unusual taste and colour took over the field. The Latin American invasion had begun as everyone got into costume for the parade to the campfire. Led in by the Latin rhythms of the samba band the campfire was soon in full flow. Every team took part and stories and sketches filled in while the vocal chords recovered after each song. As the last of the songs were heard everyone headed for bed and a good nights sleep. 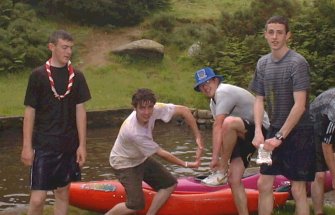 Sunday morning started bright, warm and sunny and then turned into the Antarctic only a bit wetter. However it failed to dampen anyone’s spirits as the fun activities jumped into full flight. The prestigious rubber duck race started the games as duck after duck scaled the rapids and waterfalls of the river only to be beaten to the finish line by a hippo. The same hippo was later injured in a car crash as the next event took place – the Remote Control Grand Prix. The wet weather shelter was briefly turned into Silverstone as cars of every make and size battled it out. However the greatest battle was left to last, The Foxy Boxarama in Jelly contest. Chickens and wimps steered clear as the most viscious fighting event of the year got under way. When the dust finally settled there was only time to drop our tents and await the results of the weekend. In the end it was the De La Salle Venturer Group from Waterford that won the Cairde Trophy. 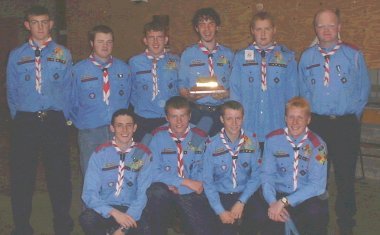