Our Venture Scouts took part in the first Mimi-Belt of it’s kind in Waterford a few weeks back, read on to find out how they got on.

All the different groups gathered together at St. Pauls’ Scout Den at 6:00 on Friday evening, which was fairly ironic considering St. Pauls themselves didn’t take part in the actual weekend itself, but that’s the way it was anyway… Predictably enough, at least three or four consent forms were forgotten, but Neillers worked heroically to track them down and make sure that all were recovered before it was too late. We were given our briefing by the powers that be, when we were given the necessary equipment to survive the next 2 days, including a map, a set of tasks, a pen and an egg. The tasks were as follows:
After our leaders had given us the vita; pieces of information, we were blindfolded and thrown into a car, before being dropped at our starting point which would turn out to be some 34 kilometre trek from our final destination (Faithlegg). Philip and myself were bundled into a car, and after what seemed like hours (it turned out to be 25-minutes) of not seeing where we were going, we were eventually told to remove our blindfolds. As we stepped out of the car and watched it speed off, we were left wondering where we had been landed. A quick stop into a local farmhouse told us that we were indeed walking towards Mullinavat. This was confirmed after about another 15-minutes of walking, when our first signpost told us Mullinavat was a further 3 kilometres away. Walking through it and down the Old Dublin Road, down miles and miles of house-less road, we turned off into Kilmacow, looking for a garden in which we could camp for the night, which was easier said than done. After all, we were in Kilkenny the night before the All-ireland final, and sure enough the first few houses we called to were full of people who’d be leaving early for Dublin the next morning. Eventually however, we found people willing to let us camp in their back garden, and after a quick supper of noodles, we went to bed, fairly exhausted. 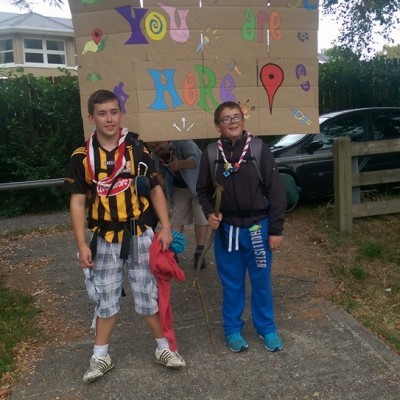 Matt & Phillip, our team on the Mini-belt 14

Saturday: Getting there.
We woke up early on Saturday morning, eager to build on the immense progress of the previous night. By 9:30am, we’d packed away our tent, cooked ourselves a most excellent breakfast of bacon, sausages and black pudding, and left a thank you note for our hosts who were still asleep. We set off down the road through Kilmacow village and past the sports complex, remembering to photograph every signpost along the way. While pausing for a break at a garage in Newrath, we saw Ben and Paddy, two of our Abbeyside counterparts, and it was here, while we were catching up on everything that happened since the previous evening, that our egg finally gave way. The four of us, minus an egg, walked the rest of the way into town together, reaching Waterford at around 12:30, where we spent a couple of hours completing the various tasks which had been set for us in accordance with our leaders’ commands. We swapped our pen for a broken toy lightsaber, and for those of you who are interested, it’s €65.60 to sent a 10kg package to Armenia, or €70.50 if you would like express delivery, although the woman in the Post Office would recommend you send a 20kg one as it works out to be cheaper, which I wouldn’t view as great salesmanship on her part. After a quick stop for a photo at Reginald’s Tower, we continued the hike towards Faithlegg at a slower pace, knowing that time was on our side, we had 3 hours to get there. We trudged along past the schools; Waterpark, De La Salle, Newtown, through Ardkeen. It occurred to me as a result of the tiredness setting in that the Dunmore Road had never seemed this long before. Eventually, we reached the fork in the road that splits Faithlegg and Dunmore, and the realization that we were within 5km of our goal gave us renewed energy; we got to the campsite as the 6th and 7th teams back. We pitched our tents, lay down on the grass and as if it was his duty to make my day even better, Neillers arrived with the news that Kilkenny had won the All-Ireland! Although for some reason he didn’t look as happy with this news as I was. When all the teams had finally arrived, we had a massive barbecue which was even better than the breakfast we’d cooked ourselves. After the dinner, a campfire and a movie, we all dispersed into our tents, all wrecked. 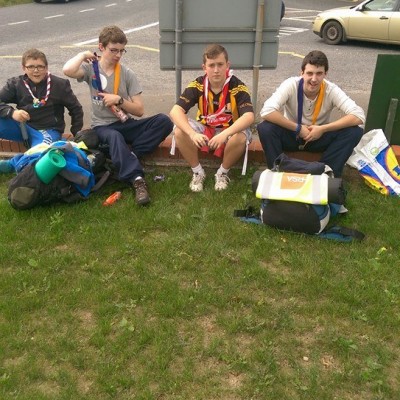 Sunday: The end.
We all woke up late on Sunday morning, there was barely enough time to take down our tents, clean up our mess and have a competition to see who could drink a pint of milk the fastest, before we went home. 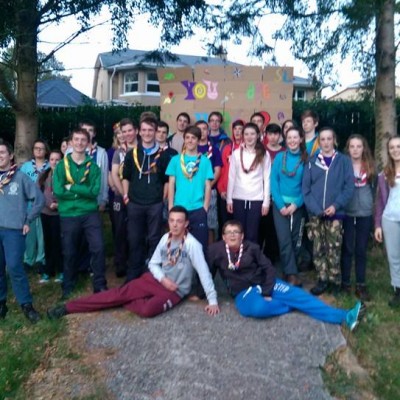