The 2011 Waterford Scout County Challenge Weekend took place from April 15th to 17th last. Congratulations to the 3rd De La Salle Scout Troop who came in second place and the 7th Scout Troop who came third.  The 3rd were also winners of the Campcraft Trophy. Well done also to St. Paul’s Scout Troop who were winners of the competition. The County Challenge tests scouts in all of their skills including cooking and campcraft.  Speaking after the event, Seamus Purcell, Group Leader said he was delighted with the results and was hugely impressed with all the hard work the troops and leaders have put in and the high standards they continue to achieve year after year.

Owen Riordan, our Chairman and former Group Leader, Scoutleader and Venturer Leader was also presented with a 25 year Service medal on the weekend. On behalf of everybody in the De La Salle Scout Group Seamus Purcell expressed thanks from the Group for all the loyalty and service he has put in. 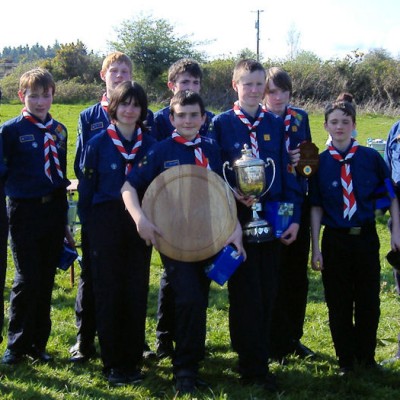 Members of the 3rd De La Salle Scout Troop with the Ted Ryan cup for second place and the Campcraft Shield.