Eighteen leaders from the De La Salle Scout Group, some high Scottish mountains and a load of haggis.  The 1999 Leaders weekend was the stuff of legends after which Roddy was made to promise that he would never wear Lycra again.

We had never been so far afield before, so when Scotland was rumoured as the venue for the 1999 leader’s weekend, we had an overwhelming response with 18 leaders from all sections signing up. Colm had everybody warned that it wasn’t going to be a breeze and that the mountains of Glencoe were no place for those who couldn’t breath. Two unprecedented training hikes were therefore held. The first was the classic circuit of the Nire Valley and the second took place in Galtymore. The hike in the Galtees included some well known and very competent navigators who made a 180 degree navigation error and ended up on Ladhar an Chapaill instead of Galtymore. They insisted however that since they had never been on Ladhar an Chapaill before that it was well worth the error.

The first Munroe of the weekend by the leadership team was Stob Coire nan Lochan.

Thursday the 21st of October was the date we finally departed for Scotland and it was definitely colder outside the Crystal City Bar that afternoon than it was in the highlands of Scotland. There were a few first time flyers in the group who were not reassured by the size of the plane on the runway at Dublin Airport. Meanwhile John Hennebry was waiting in the airport at Glasgow. John had gone over the previous week with the secret service so as to provide security for the Chinese president’s UK visit. After we picked up our minibus in Glasgow, we followed JD around Glasgow for an hour while desperately seeking the youth hostel. We didn’t however follow him up the one way street nor did we listen to the navigator who mistook the motorway for a river on the streetmap. The youth hostel was quite impressive but we quickly adjourned to Glasgow city centre to discuss our strategy for the weekend. Ian Sinnott was not impressed by the highly recommended 80 shilling brew and other younger members discovered the difficulties of climbing (and getting into discos) in soft shoes.

Looking back down into Coire nan Lochan with the Lost Valley in the background.

After somewhere between 3 and 9 hours sleep (even Billy Collins complained about the snoring), everybody was greeted with a fantastic morning view over Glasgow, the 1999 UK City of Architecture and Design. We spent a few hours in and out of climbing shops and the like and there were even those who checked out the Ann Somers shop on Sauchiehall street which had caused such a furore in O’Connell Street in Dublin. After a short delay in the Scout Shop buying Beaver annuals, we headed back over the Erskine bridge and we were on our way to Fortwilliam. Billy Flynn persisted in his refusal to risk a journey with John O’Donohue at the wheel (after narrow escapes in previous years) and he elected instead to travel at breakneck speed with JD. The banks of the enormous Loch Lomond were the backdrop for our fantastic picnic provided by Pat, the gracious sister of Macaoimh leader, George Kavanagh. We eventually arrived at Glencoe at around 5.30pm and there was just enough daylight left to get good views up the valley at the towering ridges and peaks on either side. 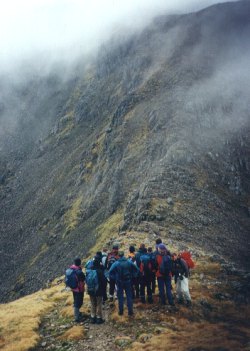 At the col before the ascent to Bidean

It was an achievement in itself to get 14 De La Salle leaders out of bed before 7.15am and it seemed all too like the middle of the night when people were being awoken. After a quick spin back up to Glencoe we arrived with plenty of walking sticks and an ice axe in hand at the car park below Coire nan Lochan. The walk up the valley was a slog and the lakes at the top weren’t exactly Coumshingaun but once we got up onto the left of the col, the views over onto the Aonach Eagach, the Beinn a Bheithir ridge and across to Loch Leven were fantastic. From the col we made a rocky ascent to Stob Coire nan Lochan (1115m) which was the highest mountain most of the group had ever stood upon to date. Colm was only too delighted to point out Boomerang gully and her sisters on the way up. After the obligatory photos and juggling at the top, we descended the spur down to the col beneath Bidean nam Bian (shown on the right). At this point the group decided to break into 2 groups so as to cater for those who were all ‘ridged’ out for the day. The first group swang back around into Coire nan Lochan while the second ascended onto Bidean nam Bian (1150m), their second Munro of the day. After lunch, the ascent of Stob Coire nam Beith (1107m) was a breeze. The descent down along the valley beneath it was ‘scrambly’ in places but eventually a way down was found and the spectacular views made up for the arduous walk out. The finishing point was of course the legendary Clachaig Inn. Nobody volunteered to emulate the unclothed ice climber whose infamous photo adorns the wall of the Clachaig. It was a most impressive, breathtaking and successful day’s walking and dinner back at Inchree which included haggis was well received and certainly well deserved. A toast was made to absent friends including Liam Butler as well as to the three generations of Scouters present for the weekend. 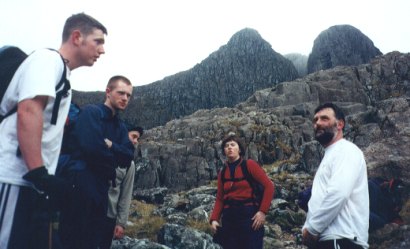 It is a testament to the strength of the Unit that 18 leaders piled out of the minibus at Achintee’s yard at the base of Ben Nevis on the Sunday morning. At this stage it should be added that we were joined by one highly regarded St. Paul’s leader, by the name of Betty Guilfoyle. She was, as Kiernan Gildea put it, ‘there to improve our Melvin performance’. The walk in from the almost sea level Achintee’s yard to Lochan Meall an tSuidhe is a cruel one but eventually it was suffered through. We also witnessed the effects of widescale erosion on the Ben Nevis footpath and the attempts which are being made to minimise it’s effects. After a break overlooking Meall an tSuidhe, we began the ascent of the zig zag footpath up the Ben. Despite temptations to stroll around into Coire Leis and scramble up the Abseil posts or even to chance the Carn Mor Dearg arete, the footpath was the best approach given the large size of the group. The seemingly unending zig zags led us up into the clouds and Ben Nevis which lived up to its reputation of being shrouded in cloud 300 days a year and there were to be no views from the top. We reached the summit at around 1.15pm and settled down to lunch beside the ruins of the observatory. TC cracked open an excellent bottle of vintage wine so as to celebrate our social climbing status in style. 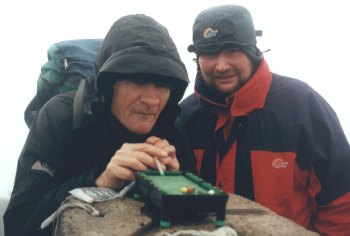 The 2 Billys at the Ben Nevis trig point

It was kind of chilly at 1344m so we had to limit the above 3000′ pool game (or above 4000′ on this occasion) to one frame. Billy Collins was the defending champion after controversial parental intervention in a previous year. However Billy Flynn, the most senior of the 14 leaders to summit demonstrated that even without his glasses or walking stick, he is not to be underestimated. He promptly buried Billy Collins and we made a hasty retreat back down the side of the Ben, passing Gardyloo gully and No. 2 gully on the way. We also avoided Five Finger Gully (our navigation being better than that on Galtymore). We were soon back down into summer weather and the ascent provided excellent views across the Mamores and over into Glencoe. It was 4.30pm before we were all back at Achintee’s yard and we were ready to head to the bar under Nevisport for some well earned refreshments. There were a few tired bodies on Sunday evening but all had achieved their summits in style. We were also rewarded with a most sumptious stew prepared by JD, Carmel Cunningham, George Kavanagh and David Guilfoyle. 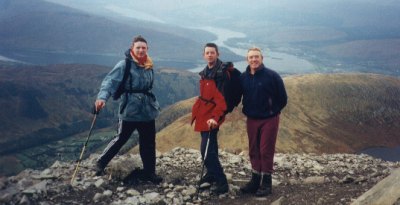 Gary Sinnott, Ian Sinnott and Tom Casey of the 13th overlooking Meall an tSuidhe on the ascent of Ben Nevis.

We had to make an early start on Monday morning to be back in Glasgow in time for the flights. Eventually after TC left his ticket in Inchree and numerous cash offers were proffered to us to switch flights, we finally boarded four different flights. There were even a few who switched genders and one or two who decided another night out in Glasgow at the expense of Aer Lingus was in order. 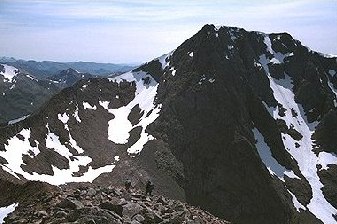 Ben Nevis from the approach to the Carn Mor Dearg arete.

In all, it was a highly successful and enjoyable trip. It was a great taste of the Scottish mountains and most importantly it was a weekend which reinforced the strength of the leadership team within the Unit.