This year for the annual St. Patrick’s weekend walk, three long distance hikers from Waterford Scout County took on the Dingle Peninsula in the form of the Dingle Way.

The Dingle way stretches from Tralee along the northside of the peninsula, around by Dunquin, back through Dingle and onto Tralee. The aim of these seasoned walkers was to take the section from camp on the north of the peninsula around the end by Dunquin and back to Lispole – approx 110km.

Eoin Kelly (3rd Cubs), Michael Kavanagh (7th Scouts) and Barry Kelly (2nd Port of Waterford/Dunmore East Sea Scouts) attempted to complete the route over the St. Patricks Day weekend. After dropping the car in Lispole, we had a very interesting lift to camp from Paudie, a very proud taxi man whose Volkswagon Transporter reached an incredible 410,000km on the clock and counting.

Thursday night started as any other – dark and interesting. The route was to follow the road from the town camp to our actual camp but with a twist, a night time stroll along a beach, our first taste of beach walking. After an hour or so on the beach, we began pondering of the age old question, was the tide coming in or going out? Shortly after these thoughts we got an answer and a race against the tide had begun. We were beginning to lose but after a short scramble, some interesting maneuvering between an electric and barbwire fence, and a scurry through farm land, tarmac was found, followed by camp shortly later. After emptying his bag, Eoin realised that he had left the pegs in Waterford, but as Scouts we adapted and used rocks to hold the tent down. 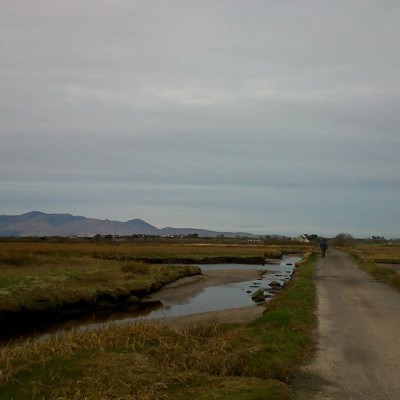 The morning was clear and quiet, in the distance the target for the following day, Mount Brandon. Not to far away from camp was our first target that day, Castlegregory, after a breakfast of Denny’s finest the walk began. Upon arriving in Castlegregory, Eoin and Michael hit the Spar with the hope of finding pegs or a substitute and coffee. Eoin had found a solution to “what to do when you forget the pegs”….colouring pencils. Michael came out brandishing Coffee and Donuts, not a bad start to the day, until a driver thinking his car was in reverse nearly crushed Michael against Spar, but thanks to Michael’s quick reactions, disaster was diverted. 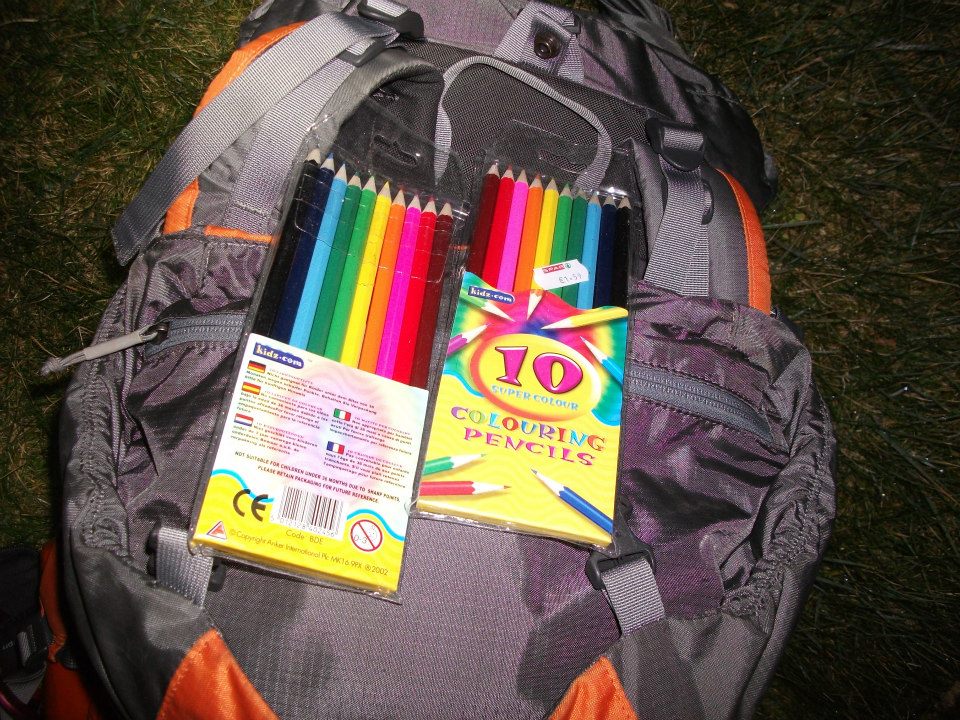 A long, tough day of walking was ahead with the aim of dinner in Cloghane. Starting out from Castlegregory, the first of many beaches that day were met, soft sand not ideal for hiking with full rucksacs but in classic long distance walking fashion we got on with it. Even though not as well marked out as the Beara way and Sheeps head way, the route was easily navigated with out too many obstacles.

After a few interesting encounters with cows and horses, and also taking in some splendid views, we gazed upon Mount Brandon thinking it wasn’t too far but what lay between us and our goal was Brandon Bay, later to be told the longest beach in Western Ireland and it felt like it.

Graced with great weather we set out luckily with wet, hard sand as the tide was out. After what felt like hours of walking we could see what we thought was Cloghane in the distance, only a mere half hour away, but upon checking the GPS realised we had only reached half way along this fine bay. We made our way along, getting some amusement drawing in the sand and watching Michael try to cross the rivers without getting his runners wet. 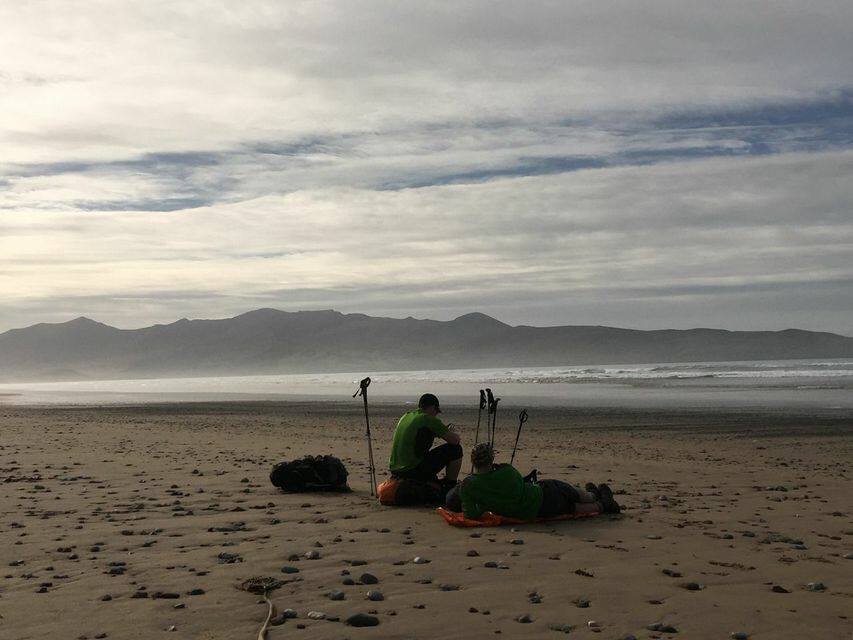 We reached Cloghane just as the shop closed and Mass began, “nothing like a good long mass” was uttered, instead we decided to hit O’Connor’s B&B for some food and refreshments. We were greeted by one of Ireland’s friendliest barmen and ate until full. As night fell, rather than make for Mount Brandon’s base we chose to camp out back of the B&B, a great option as we enjoyed good company including bumping into another Waterford man down fishing for the weekend. 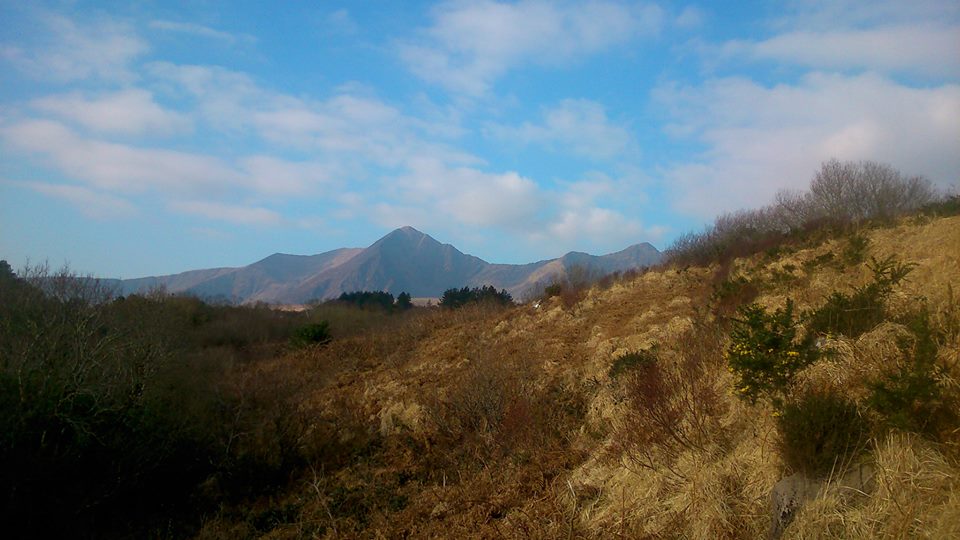 The Saturday morning, we were greeted by a fine clear picturesque view. After clearing up camp and collecting what was left of our “pegs” we set out, to take on Mount Brandon and onto Murreagh. When approaching Brandon the plan was to follow the track under Faha ridge and head through the Paternoster lakes. During the ascent a local farmer ran past us in jeans, hoodie and runners while throwing us a quizzical look and asking what the craic was with all the luggage. There was a good crowd on the already well eroded track to the summit, but the weather was good and everyone was in high spirits. 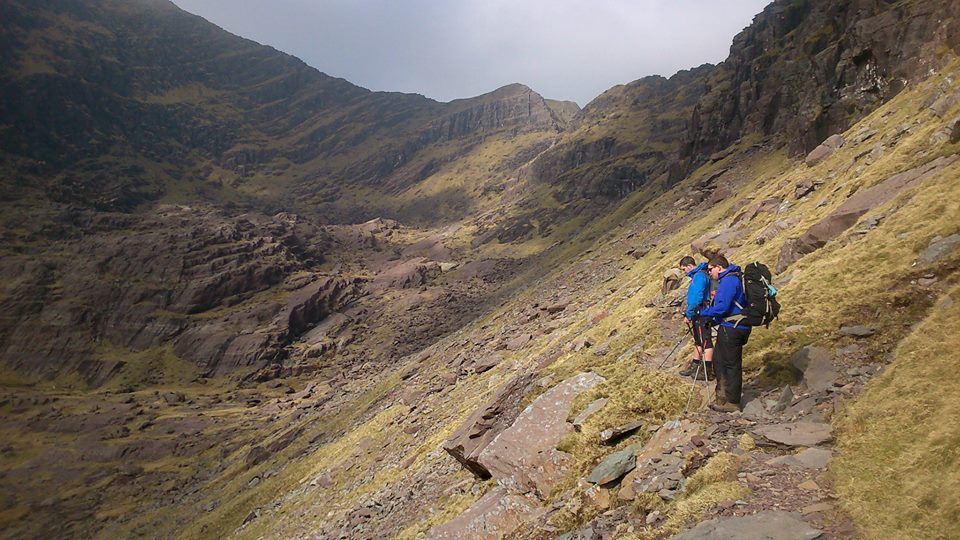 When reaching the summit, the temperature had dropped and it was very cold so huddled up in a small shelter we grabbed a bite to eat, Michael had a game of pool, and we then headed down the west side of Brandon following a well worn track eventually ending in a car park. After a few hours of walking we reached Murreagh, where the owners opened up for us and pointed out some great camping spots along the near by cliffs. After getting dinner, it was late so we took their advice and camped along the cliffs. 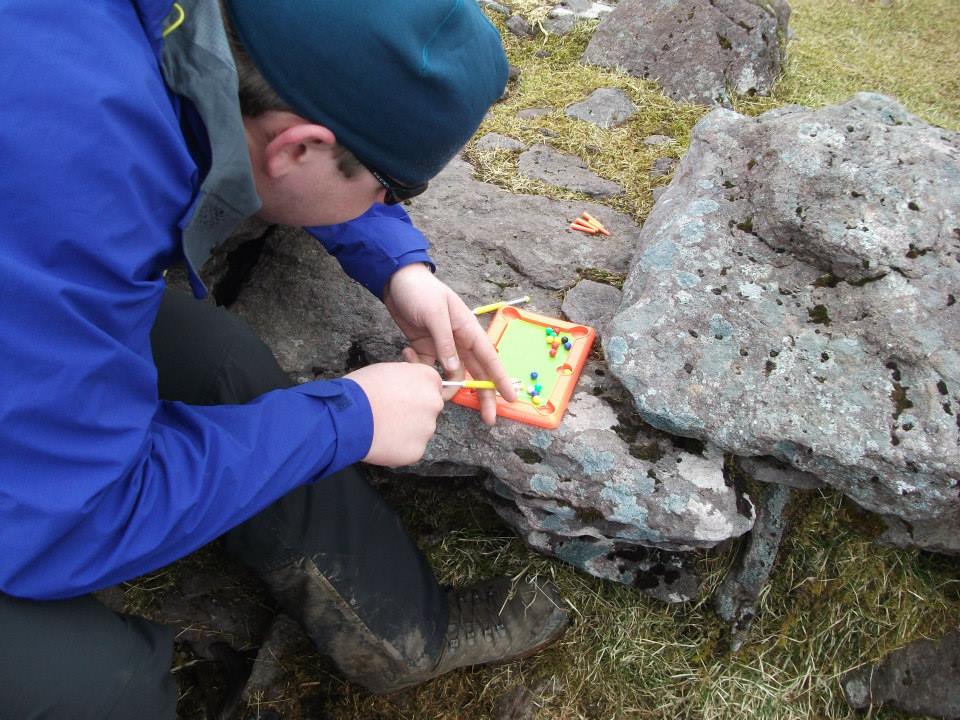 During the night and following morning the discussion began, sadly the beaches had slowed our progress more than initially expected, so we had a to make a slight detour, cutting off the end of the peninsula and missing the Dunquin section. So today we headed for Ventry via Ballyferriter, and an excellent steak sandwich.

Following a beach, road and bumping into a very enthusiastic American woman, we reached Ventry and seeking camp. We found camp in a damp and muddy field belonging to a farmer, due to the lack of a footprint for the tent we had to go old school to stay dry. 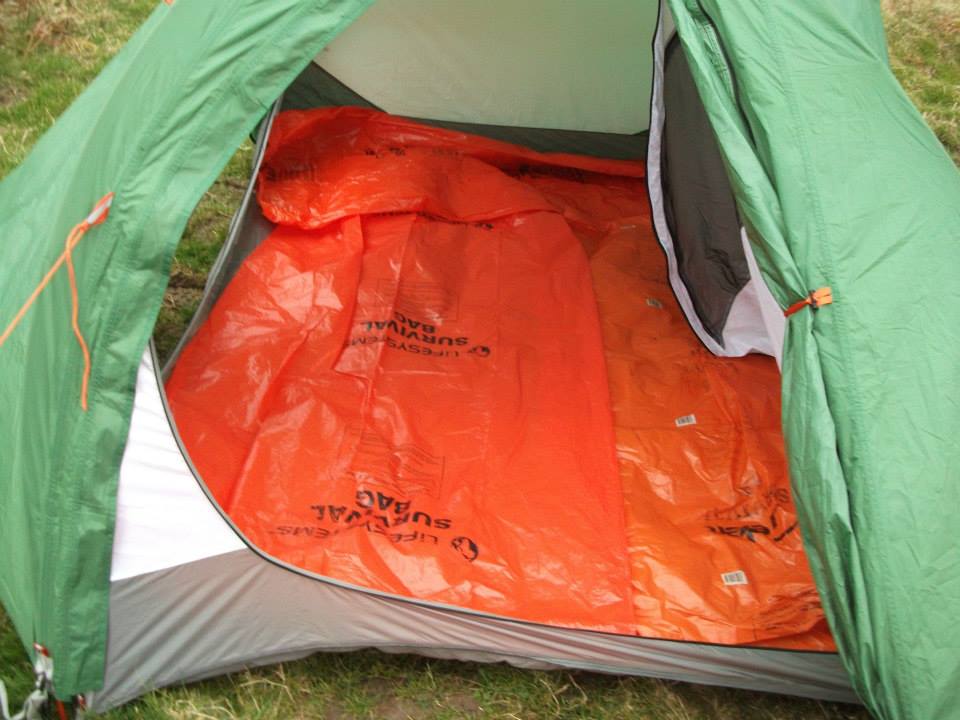 A dry night was had and Michael got up full of energy and raring to go. What followed was some great walking to get to Dingle, along tracks and stiles, the kind of walking we are used to. We resisted the urge to go visit the penguins in Dingle and headed to get something to eat in SuperValu, sadly just missing one of their parades. we headed out of Dingle towards the Connor pass, with more spectacular views and walking, it was a great finish to a great day and weekends walking.

In classic fashion, we finished the walk by running the last 100 metres to the car, and then enjoyed a victory coke and ice cream. 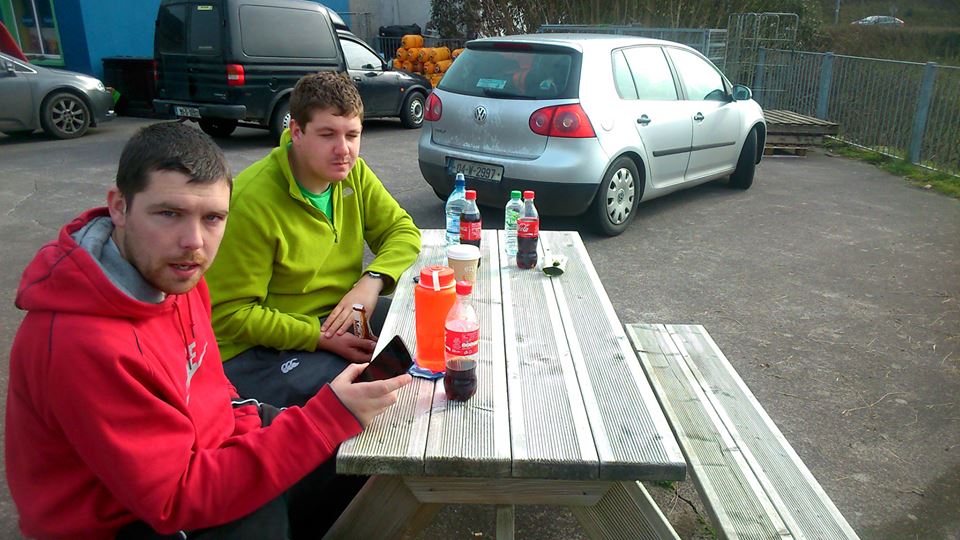 It was a different kind of walk compared to our past St. Patrick day outings, both mentally and physically, as this was the first year without our companion, inspiration and friend Colm, and the man who could talk you through the whole 90km + Peter Murphy who is off on an American adventure. Even though not with us physically their presence was felt in stories, jokes, inspirational quotes and the classic phrase “what would Colm and Peter do”. 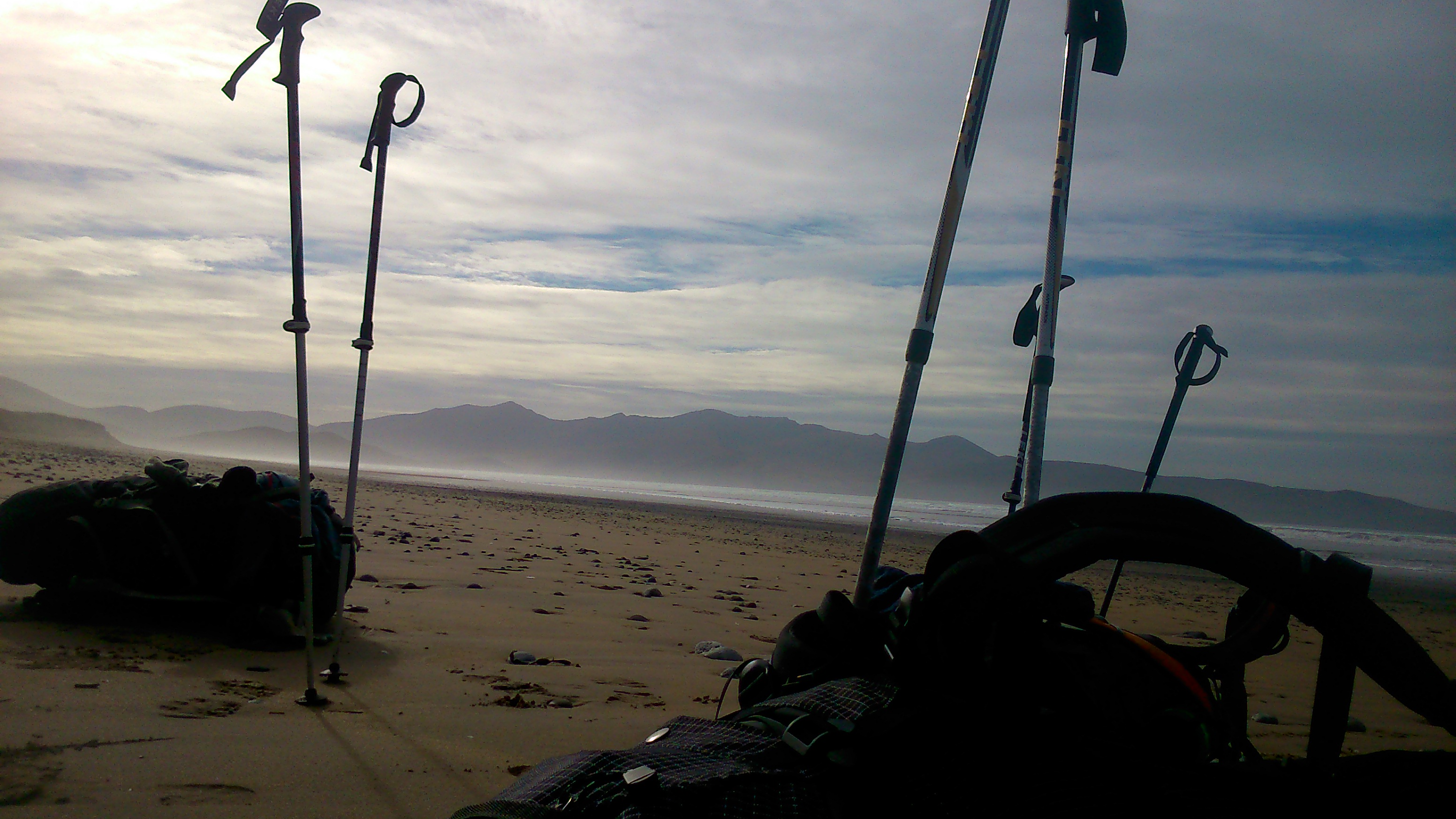