Eoin Falconer from the De La Salle Venture Scout Group reports on his trip to Ghent, Belgium to the Youth Spokesperson’s Training Event.

Eoin Falconer from the De La Salle Venture Scout Group reports on his trip to Ghent, Belgium to the Youth Spokesperson’s Training Event.

Eoin Falconer (3rd/7th/13th Waterford) and Patrick McDonald (Antrim) have been funded to go and become Youth Spokespersons at a Youth Spokesperson’s Training in Ghent, Belgium from the 4th of July to the 8th of July. The aim of this event is to encourage and enhance a good image of scouting within the participating European countries. The event is funded by WOSM and the youth in action European association. The age range is 17-23. The outcome of the event is the recognition of the participants as External Representatives for the European Scout Region.

Our flight was to leave at 6:50 AM so we left the Metro Dublin Airport Hotel at 4 o’clock and we got to terminal two in Dublin Airport. We got our flight with no problems and it all went very well. When we arrived in Brussels and instant smell of cheese hit us. This was to continue for the duration of our stay. We then had to take a series of trains to get to the Gent-Dampoorat station which was only a ten minute walk from the hostel we were staying in. On our way we randomly met two of the other participants from Finland and we started to talk to them which resulted in us missing the stop and heading off in a completely different direction. We then had to get off and we went back finally to Gent-Dampoorat. We then had pleasant ten minute walk even though the weather was boiling. We left our gear in the hostel and decided to go and to get food with the Finnish people. We got to a nice looking restaurant and we sat down and wasted away a couple of hours talking and eating. We then got back to the hostel and we began the official programme. The trainers for the weekend consisted of Andrew Thorp (England), Simon Carter (England), Radu Seuche (Romania) and Mary Scriven (Ireland). Also the person who dealt with the practical organisation, Antal Piross (Bulgaria). After the introduction we began to have an international food tasting evening, where everyone had to bring food special to their country for everyone to taste. I managed to boil over our butlers hot chocolate almost destroying the cooker in the kitchen of the hostel. But it was a great night and we all went to bed soon after it due to our long day. 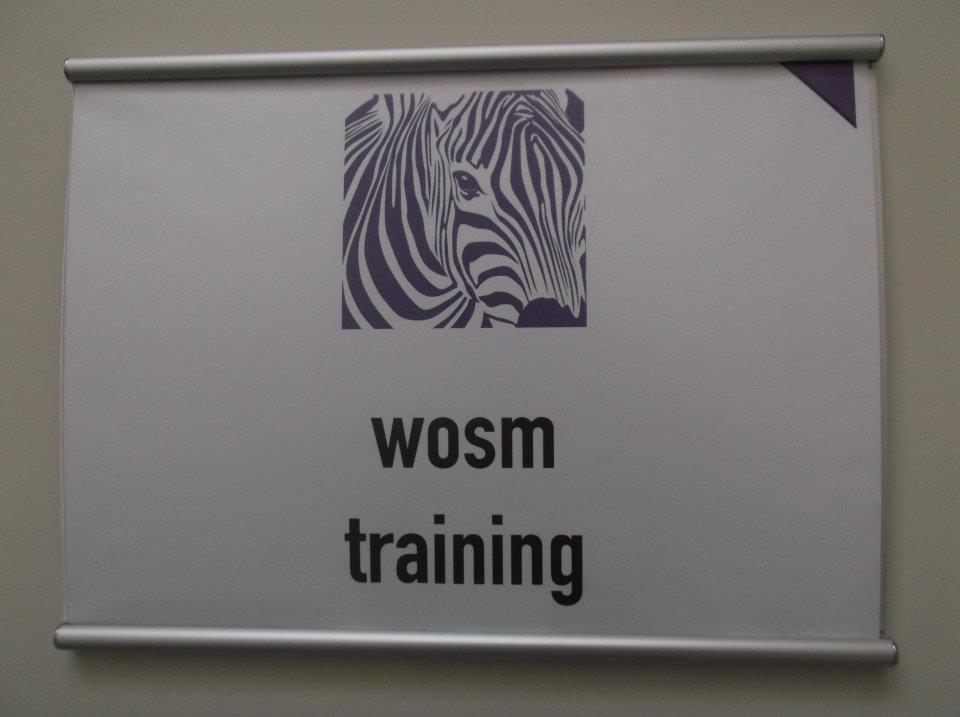 The second day came and we began to get to know the people better. There was people from Greece, Bulgaria and Finland in our room. We then got a bus that we missed the first time to the conference centre called the Zebrastraat. They gave us a quick introduction to the training course and told us the main aims of what they are trying to achieve with us. The first speech was made by a rep from the Brussels office of WOSM and she asked us the question “What is Scouting?” and if you really ask yourself that, it’s a lot more than meets the eye. We learned about the stereotypes that revolve around scouts and how people perceive Scouting. After that talk we were split into groups of five to do an exercise called Vox Populi (voice of the people) whereby we had to go out onto the streets of Ghent and ask random people a few questions about scouting and what they think about scouting. At the end of this we had to make a video about what the general public thought. We had 5 hours to do this. Our exercise was great fun we met loads of different people and my role was the presenter due to my better English. The results were surprising and people associated things like alcohol and homophobia with scouting. This really puts into perspective what people think. The final result was good even though we thought we had lost the video due to our Austrian friend’s laptop crashing. We then met back up with the group and we went to have dinner. I got a giant kebab, it was ok but I’m still not too sure what the meat on it was. After the dinner we made our way back to the hostel where we watched the videos we had made. One group did half of their video with their neckerchiefs on and the other half with them off and the negative comments were seriously stronger with them off. This was a very interesting exercise and really showed the image of scouting in the public eye of Belgium. After the videos we all just sat around the hostel until we wanted to go to bed. 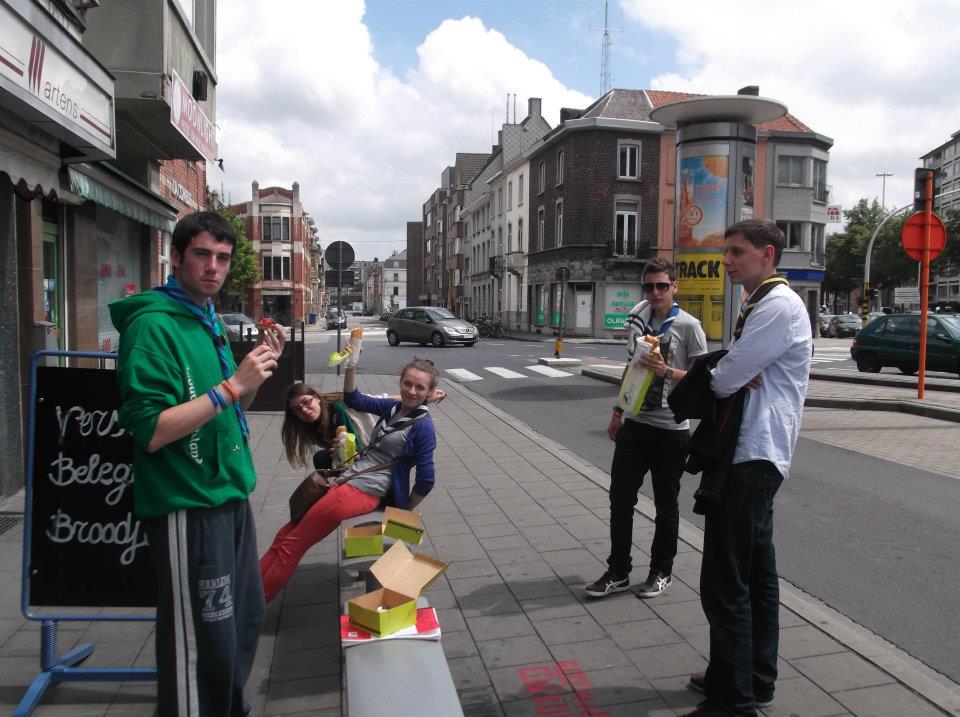 On the streets of Ghent

Day two started with a continental breakfast (EW!) and then we got the tram to the Zebrastraat. This day was set to be full of workshops and the program definitely seemed to reflect that. First of all we set out to find out exactly how people externally represent in their countries and then this was left to simmer in their minds. We then had a series of workshops which included public speaking, press interviews, and writing a press-release about an event or some initiative in your association. My personal favourite of these was the press interviews as we were given difficult questions which we had to turn into positives for scouting. After that we went to dinner, this was the worst dinner I have ever had. It was a Turkish pizza but I headed down to a bakery and got myself a cake. After dinner we were brought on a night programme by one of the five scouting associations of Belgium, FOS (Free Open Scouting). I personally had a good time with these people, but for some reason they didn’t seem to get Irish humour (dry arses). The night was good though and we got to experience some of the city outside of the conference centre, which was nice. After a long day we headed back to the hostel and slept! 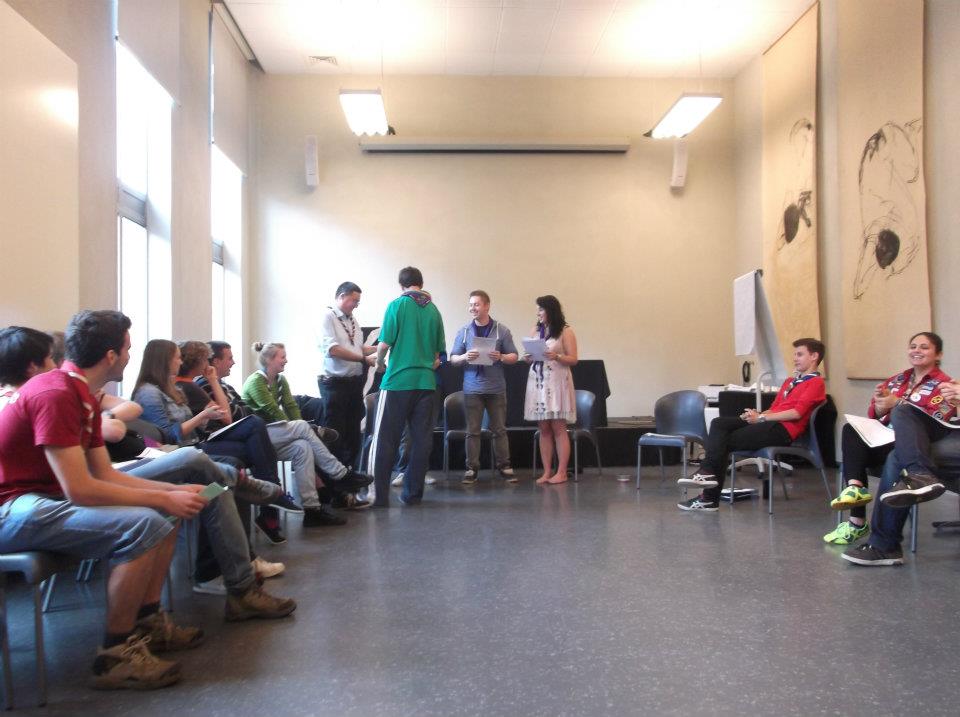 Group participation at one of the many workshops during the week.

With the same morning rituals we headed again to the Zebrastraat to start with more workshops! We started with the quite daunting task of the television interviews which I myself was quite dreading to be honest! After my first try though and then a few tips I felt more comfortable and now I’m more confident in front of a camera, I hope. After television and a coffee break we then had radio interviews, these were only short interviews where we had to try and get across the idea of the atmosphere at a scout event, it was difficult but again the trainers were very helpful and got us through it very confidently! After lunch we then had to decide on what we will do next in our own associations, this included the formation of an official WOSM peer-group. We decided to link up with the Czech-Republic because they are similar in size to us with around 40,000 members and they are also interested in our youth involvement structure. This bouncing of ideas happened all day and we have now decided that the two from the Czech-Republic will now be coming over to Ireland in November for the pre-youth forum national event, An Chéim. We are also looking forward to a possible trip to the Czech-Republic for a media investigation. After this we then had dinner, a more normal spaghetti dish. Then we had another night programme by FOS which was great and included us learning about some of the Ghent folklore and some of the reasons why the city is built the way it is. After a long day we again headed back to the hostel to go to sleep! 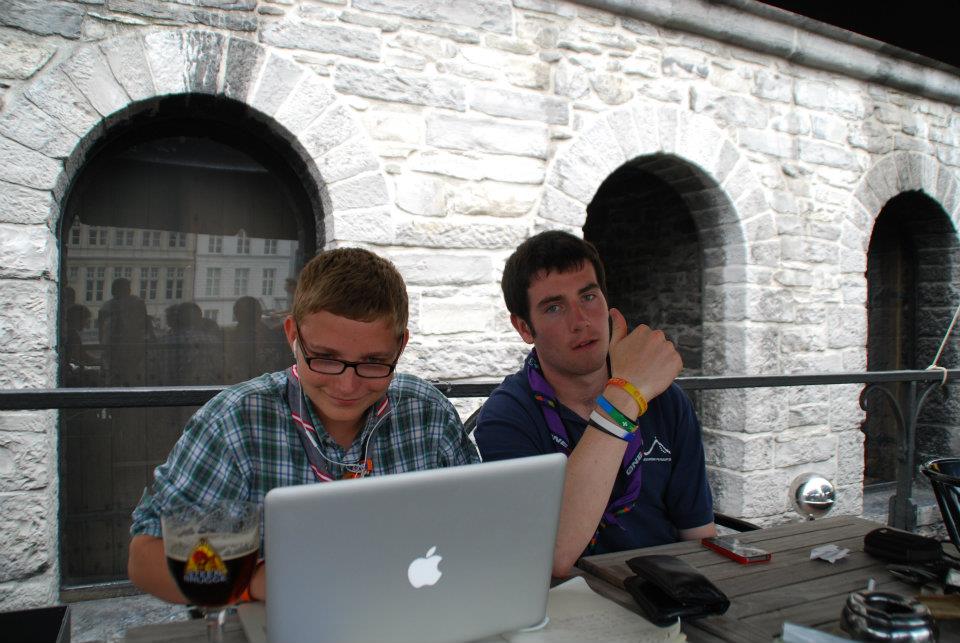 Before the laptop crashed

The final day is really a review of what we had learned and how to put them into practice and how we would get these ideas appropriately to our associations. We were awarded the European award, ‘Youth Pass’ which was sort of a qualification from the event to show our skills in an official document. After that it was time to say goodbye and we did so very swiftly as Patrick and I decided to head to Brussels on the train before our flight for a bit of an exploration. This ended up bringing us to see the Manneken-Pis, which I will not explain so please look it up and also some of the nicest chocolates in the world and some cool modern art that is just randomly on the streets of Brussels! On this adventure we were accompanied by our Finnish friends and shortly after they left for the airport we did too. After meeting our friend from Slovenia in the airport we set off on our own journey back to Dublin where we headed straight for the local Chinese.