The E8 European long distance path is one of the European long-distance paths, leading 4700km across Europe, from West Cork to Istanbul in Turkey. The Irish E8 path which runs from Dursey Head to Dun Laoighre has the reputation as being one of the toughest sections. It takes in most of the Beara Way, a section of the Kerry Way as well as the entire Duhallow, Avondhu, East Munster, South Leinster and Wicklow Ways. Overall it is 603 kilometres in length and involves over 22,500 metres of ascent and descent.

At the beginning of the E8 at Dursey Head

Eoin Kelly (3rd Cubs Assistant Leader and DLS Rovers) and Colm Ennis (Online Editor) from the De La Salle Scout Group became the first members of Scouting Ireland to fully complete the route when they reached Dun Laoighre on Sunday 4th June last. They had completed the 603km route in 21 days of hiking which they did in stages of between 1 and 3 days duration. This often involved hiking a section of the route and then cycling back to the start to collect their car. Their Killarney to Bweeng push saw them hike two back to back marathons while their final push along the Wicklow Way to Dun Laoighre also had a marathon thrown in and was done in just 4 and a half days. The route has in fact seen very few completions and has rarely been done as fast!

After completing the Irish E8 at Dun Laoighre

The Beara Way in perfect conditions on St. Patrick’s weekend turned out to be one of the highlights of the route but as they made their way through the hills of Kerry, Cork, Tipperary, Waterford, Kilkenny, Carlow, Wexford, Wicklow and Dublin every stage had something unique to offer. Challenges included the occasional blister, a missing yellow man or two, many dogs to be fended of and the odd cattle attack. Surprisingly there was not much rain apart from on the last day.

Colm says: “I’ve walked and climbed all over Ireland, the UK and Europe and when I discovered the existence of the E8 on signs on the East Munster Way I felt I had to at least complete the Irish section and walk across my own country. I am also startled at the number of people who head off to walk Kilimanjaro or the Camino de Santiago but have never been up Mweelrea or thought about walking the Beara or Kerry Ways so I felt I had to experience and become a better advocate for long distance walking in my own country. The walk starts with an incredible burst out of Dursey Head and the Atlantic ocean, skirts the Reeks into Killarney before the long and varied sweep across the entire length of Cork. Then it’s along the Knockmealdowns and the world class Comeraghs, a sneak across Kilkenny, turn left at the Blackstairs before a run across the Wicklow and Dublin Mountains and a final stroll down into Dun Laoighre. I have walked the entire Pyrenean Haute Route from the Atlantic to the Mediterranean, GR20 in Corsica, West Highland Way, Cape Wrath Trail and the Tour de Monte Rosa but the 3 days on the Beara peninsula walking from Dursey Head to Kenmare were as good as the very best sections of all those routes. Ireland has long distance walking in our mountains, across our countryside and on our coasts and genuine friendliness and craic that can rival the very best in Europe” 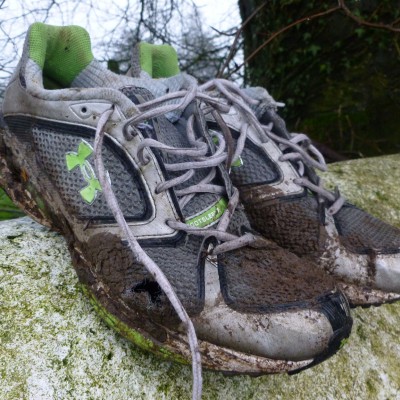 What were the highlights?

– Leaving a silent Clogheen for the Knockmealdowns during a cold and misty spring sunrise.

– Being continuously asked if we were doing the walk for charity – No walking is something you should do for yourself!

– Last September in brilliant autumn visibility on the Galtees I could see down to West Cork and Kerry and north east as far as the Wicklow mountains. To know that you have walked every step of the way between those points is an incredible feeling.

– The young lads from outside the chipper in Dundrum who gave us quite a long lift to the start of our walk from Slieve Maan. They talked non stop, it wasn’t on their way, they had never been up that mountain road before and would barely accept even a fiver for petrol.

-Eily Buckley at Geararoe B&B in Millstreet was incredibly friendly to us but we couldn’t impress her at all with our tale of having just walked a marathon from Killarney or the fact that we were walking across Ireland.

– The full herd of cows/bullocks that chased us down the field above Mountain Barracks. We may never be the same again.

Any interest in doing more of the E8? “Yes, we might mix cycling and walking across the UK, Netherlands, Germany and Austria. Slovakia, Poland, Ukraine and Romania, Bulgaria and Turkey could make for some very interesting walking and experiences. You get a completely different experience of a country when you walk away from the usual haunts for tourists and walkers. There are also thoughts of an Irish triangle. Maybe following the Beara-Breifne way to the north and then crossing back to Dublin” 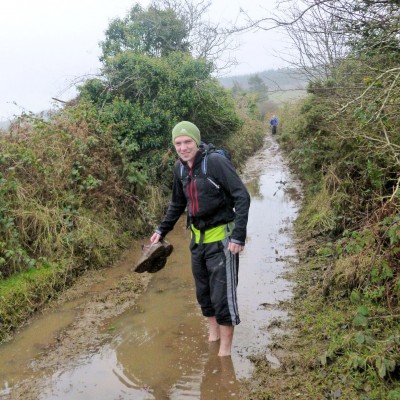 In what stages did ye do the walk?

12 Clonmel to Carrick on Suir

It would be great to see others members of the Group taking on this challenge or perhaps tackling some of the next sections. It would also be fantastic to see more Irish walkers giving consideration to their own country as a long distance walking destination. The lads received a very warm welcome right the way along the route and the routes are well marked. The logistical planning in getting to some of the start and finish points takes a bit of work but this is made up for by the decent hostelries along the way while you figure it all out.

Dawn on the Beara Peninsula

After Ireland the E8 crosses the Irish Sea into Great Britain, where it follows part of the Trans Pennine Trail. After crossing the North Sea, it passes through the Netherlands, Germany, Austria, Slovakia, Poland, Ukraine and Romania. It finally crosses Bulgaria before reaching Turkey.

The route of the E8 Long Distance Path

Eoin and Colm are also members of the Waterford Institute of Technology Mountaineering Club and Rathgormack Climbing Clubs respectively. They are rumoured to now be in search of another mountainous island to traverse.