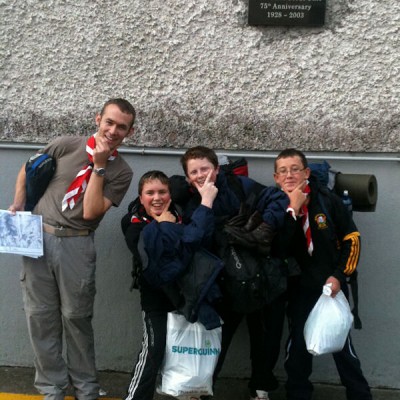 Above: The 7th De La Salle’s Connaught MPC 2011 team before leaving the den. 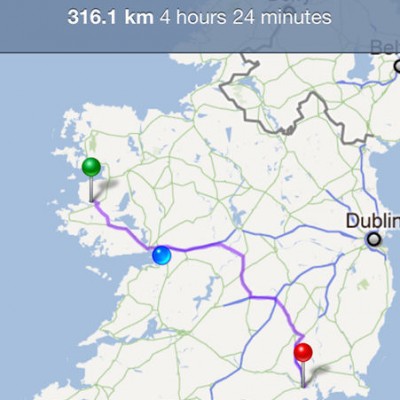 We met up at the den ay 3:00pm, and a stop at Tesco Lisduggan and 2 missing consent forms later we eventually got on the road in Doctor Paddy’s bus of banter! The journey took us 6 ½ hours including stops (we only got lost twice). We arrived at the car park at 10:20pm and checked ourselves in. Then we set ourselves up for the 2km walk we had to complete to get to the base camp. After the hike, we set about looking for a flat, dry piece of land to pitch our tent, no easy task in a bog in Co. Mayo. Eventually, after a good half hour, we found a decent place. Liam and Adam got up our 3 man Vango, while I helped Paddy with his 2 man tadpole. By 01:00am we were all asleep.

We woke up at 07:00am to the delicious breakfast of – Pot Noodle (of course) and dry Weetabix. After a hurried breakfast, Liam rushed down to the PL’s meeting and came back with the news that we would be setting off on our big hike at 09:00am and to bring our bivvy bag and sleeping bag in case of an emergency. After preparing our bags and armed with all sorts of weapons including chocolate and bog roll, we went down to check out and commence the hike. The 1.8km uphill hike to the first checkpoint was arguably the hardest section of the hike. After we reached the first checkpoint, a gale force wind came on, and we found shelter behind some big rocks. When the wind died down we began moving at a reasonably fast pace and after the fifth checkpoint, I took over from Adam as the navigator. Some time later, we encountered a checkpoint on our way to a different one altogether and they asked us did we want to go back to base camp because the weather was so bad, we decided that that’s what we’d do and so we set off along the edge of the mountain ridge almost getting blown off multiple times. Eventually we came to the point to go down in to the valley. When we got down, we crossed a river to get back to base camp. As soon as we got back, we boiled up some water for a feast of Pot Noodle and Cup-A-Soups . We then lay down in the tent and relaxed for a few hours before going to sleep at 8:30pm (Yes, we were wrecked!). 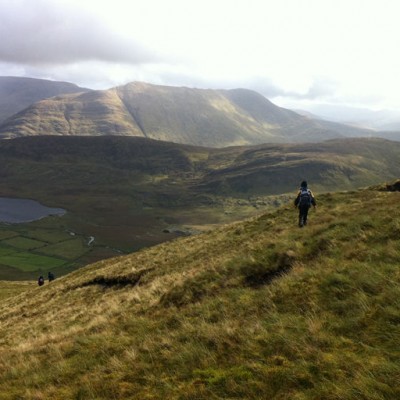 Above: The team on one of several descents on Saturday

We woke up at 02:30am this morning to find the 4 walls of the tent closing in on us from all angles. I went outside to stamp in the tent pegs, to make sure the wind didn’t blow the tent away with us in it. We then drifted off to an uneasy sleep. When the alarm went of at 7am, we decided to stay in bed until called. That happened at 09:00am when we went down to the Scouts Own to say some prayers and receive our badges.

Soon after we were packed away and ready to go, but one last challenge awaited us – to cross a river. We went in to the freezing cold river, all 4 of us getting drownded wet! We walked a further 100 metres before Paddy told us to take all our wet stuff off while he got the car. So there we were, the 3 of us, freezing and waving at all the people passing by while our leader ran off to get the car to take us home. Eventually (well, about 20 minutes but it felt much longer) Paddy returned in his bus of banter. We got changed in to dry clothes and drove off on the way home, making 2 stops, one for mass and one for food. We arrived back in Waterford at 4:50pm. 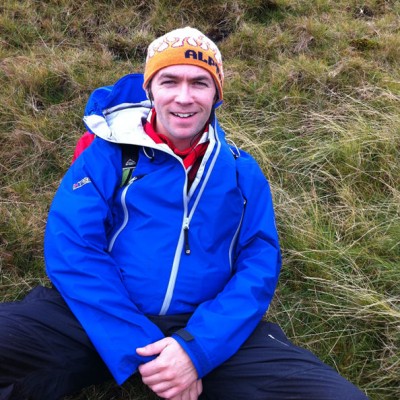 Above: Paddy taking a break on the Saturday hike